Simulator to Train Police Use Lethal and Non-Lethal Weapons

The police have commissioned a simulator which will help armed officers hone their skills.

The simulators has been installed at Ta’ Kandja complex, which houses the Rapid and Special Intervention Units.

The police said training will be provided for different scenarios and can cater for both lethal and non-lethal weapons, such as taser guns and pepper spray.

(WFSB) — So far this year, there have been three police-involved shootings in the state. Video from two of them have been released, and it is shown that tasers were used in both of those cases, yet police ultimately used their guns.

“When electronic defense weapons first came on the market, the idea was that they would be used to replace lethal force. I think that was sort of a misnomer,” said Ken Barone of the Institute for Regional and Municipal Policy. One case was in West Haven after 19-year-old Mubarak Soulemane led police on a chase on I-95. 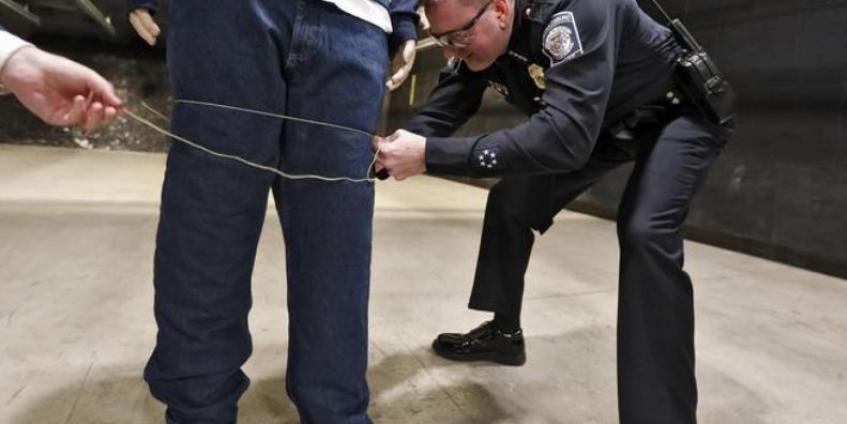 A second local police department is considering buying new technology designed for officers to use when a suspect needs to be stopped but is not armed. It acts like a device typically used by fictional superheroes.

Representatives of Wrap Technologies demonstrated the BolaWrap on Friday to more than a half-dozen central Ohio law-enforcement agencies at the firing range at the Reynoldsburg police headquarters.

The BolaWrap looks something like a stun gun with a laser sight and sounds like a gun when fired. But instead of bullets, it discharges an 8-foot-long Kevlar tether with a fishhook-like grip on each end that wraps around the arms or legs of the target, with the hooks attaching to clothing to hobble the person.

The device, designed to keep someone from moving toward officers or fleeing, is best used at a distance of 10 to 18 feet.

FRYEBURG, ME — A Fryeburg entrepreneur has received four Maine Technology Institute grants totaling almost $22,000 to develop a “less lethal” weapon:  an air-powered grenade launcher that can shoot specialized projectiles at a safe velocity whether the target is 10 feet away or 300.

Boeker, a Web developer and programmer, was inspired by police riot videos on YouTube.

“I saw people getting really hurt by beanbags coming out of shotguns and 40-mm grenades—those types of weapons can fracture your skull or break your ribs and push them through your heart and lungs,” he said. “I just thought, ‘What the heck, we can’t do anything about that? There’s lots of technology available.””

He said it took about 2 years to develop a valve, software, and laser system for the laser and light detection and ranging-controlled, Variable Velocity, Less-Lethal Launcher.

Minister of National Security Marvin Dames announced yesterday senior officials are preparing to meet with Arizona-based Axon Enterprise, formerly TASER International, an industry leader in weapons and technology development for law enforcement and civilians, to determine the viability of their use.

Dames made the announcement as he addressed hundreds of men and women of the armed forces at Holy Family Roman Catholic Church on Robinson Road for the organization’s annual church service.

He outlined the rollout of technological tools, including ShotSpotter technology, and revealed the closed-circuit television (CCTV) program, soon to be expanded by over 500 cameras at a cost of $5.9 million, will be centralized in a new real-time crime center. A South Texas police department added another weapon to its arsenal. Only this one was designed to cause less harm than a typical firearm.

Rockport Police Chief Gregory Stevens showed off a 12-gauge shotgun, parts of which were bright orange, during a training session for the city”s police force.

When fired, a bean bag-filled round comes out at a velocity that can disable someone while potentially sparing the person”s life.

“Law enforcement is facing a lot of calls where we deal with people that live with behavior health needs,” Stevens said. “If, for whatever reason,s they face that mental health crisis and have a weapon. We have to come up with ways to (deal with that) without taking human life.”

As the showdown between police and protesters in Hong Kong has intensified, officers have used increasing force, deploying an arsenal of crowd-control measures and weapons, including tear gas, pepper spray, rubber bullets, sponge grenades, and bean bag rounds. Protesters have also stepped up their actions, hurling petrol bombs, vandalizing mainland Chinese banks and businesses believed to be pro-Beijing, throwing bricks at police stations, and battling officers in the streets – in some cases, with metal bars.

The protests erupted over planned legislation that would have allowed extraditions from Hong Kong to mainland China. Police say they have fired over 6,000 tear gas rounds, around 2,400 rubber bullets, some 700 sponge grenades, and over 500 bean bag rounds. Police have also fired live bullets on at least 11 occasions during the protests, injuring two people, a Reuters analysis shows.

While the number of protests has dropped in recent weeks, the violence has intensified. Reuters scrutinized hundreds of images of the protests, as well as dozens of police reports and video footage, and combined this research with reporting on the ground to document the weapons used by the police and protesters and how the violence has escalated from day to day.

WILMINGTON, NC (WECT) – Wilmington police have a new non-lethal tool to stop criminals in their tracks called the BolaWrap. The handheld device discharges an 8-ft Kevlar cord which wraps around the subject’s body, anchors to their clothing, and prevents them from advancing toward police or running away.

The BolaWrap offers a pain-free solution for officers who might otherwise be required to use force.“This is another tool that can go in the toolbox,” said Assistant Chief Donny Williams. “There will be situations where the BolaWrap may be ideal, but it’s not going to fit all situations. It’s another option, and we’re really excited about this new technology.”

Its quick action allows for easy and painless restraint and, with individual cartridges, officers can reload within 10 s. “It’s 2019, so the public expects law enforcement to have some type of less-lethal alternative. It’s as simple as that. So this, the way the chief and administration look at it, is just another option for officers to have on the street. If the taser is not going to work in a situation, maybe they’ll use the BolaWrap,” said Lt. Kevin Johnson. Johnson said the chief needs to approve a policy regarding the new device. After that, officers will be brought up to speed with classes, use of force policy, practical exercises, and written tests.

Several new types of grenades, including one that can be stacked to create a larger explosion, have garnered interest from the U.S. Department of the Navy.

The Crane, Indiana-based Naval Surface Warfare Center issued a request for information about the modular grenades last month, along with several other early-stage procurement notices about several flash-bang grenade variants. The Marine Corps also has expressed interest in the stacking grenades.

The notices come as the military looks to expand its nonlethal-weapons capabilities for a complex, modern battlefield, where troops might encounter more low-intensity conflict scenarios or situations in which civilians and enemy combatants are intermixed.

“Lethality is absolutely critical in the modern combat environment that we find ourselves in, but the world’s most lethal, incredible force must also be able to compete in all the other phases of combat,” Marine Col. Wendell B. Leimbach, Jr., said earlier this year at the National Defense Industrial Association’s Armament Systems Forum in Fredericksburg, VA, the association’s magazine reported.

MARINE CORPS BASE, QUANTICO, VA – The Pentagon’s Joint Non-Lethal Weapons Directorate is hoping to reframe the talk about non-lethal weapons amid a push by the Defense Department to boost lethality for high-end warfare.

The office’s director, Marine Corps Col. Wendell Leimbach, instead wants to talk about capability gaps in an era of gray zone warfare with Russia and China and where “intermediate force capabilities” – an umbrella term that also includes non-lethal weapons – would give American forces a better chance to compete.

Leimbach said it was hard at first to get meetings with service leaders when he introduced himself as the non-lethal guy. Now, he said while speaking at the Modern Day Marine 2019 exposition last week, he’s getting more meetings, and more Warfighters are starting to acknowledge the capability gap they’ve experienced for years without realizing it.

He couched his talk around a warfare spectrum with Phases 0 through 5: Phase 0 is shaping the environment, Phase 1 is deterring, Phase 2 is seizing the initiative, Phase 3 is dominating, Phase 4 is stabilizing, and Phase 5 is enabling civil authorities to resume control after the war. Aside from Phase 3, or all out armed conflict, he said the rest of the spectrum is “gray zone” warfare.