As illustrated in Figure 1, missile technology has experienced steady and dramatic development since the 1950s, which has in turn helped to transform the ways in which combat is fought.¬† The following examples touch on some of the most noteworthy missile advancements.

In 1956, the proportional guidance accuracy of the AIM-9 Sidewinder led to higher lethality and a higher exchange ratio in air-to-air combat.¬† A real-world demonstration of these improvements was provided on the Sidewinder‚Äôs Ô¨Ārst combat application in September 1958, when Republic of China F-86 aircraft destroyed four People‚Äôs Republic of China MIG-17 gun-only aircraft, with no losses.

In 1957, the development of the Russian R-7 high-thrust rocket motor provided the capability for the world‚Äôs first intercontinental ballistic missile (ICBM), a capability that brought within reach virtually any target (or any threat) around the world.

In 1960, the SA-2 Guideline (V-77) two-stage high-performance rocket motor provided the capability for high stratospheric altitude intercept.¬† The capability was demonstrated during the famous international incident in May of that year, when the Soviet Union used an SA-2 to shoot down an American high-altitude U-2 reconnaissance aircraft being flown by pilot Gary Powers.¬† Also in 1960, the application of solid aluminized propellant allowed the development of a safe high-performance rocket motor for the Polaris submarine-launched ballistic missile (SLBM).

In the late 1960s, developments in radar seekers led to the Ô¨Ārst combat demonstration of a beyond visual range (BVR) surface-to-air missile. ¬†In 1968, Talos missiles were launched from the missile cruiser¬†USS Long Beach¬†and successfully shot down two North Vietnam MIG aircraft at a range of more than 50 nautical miles.

In addition, proven semi-active laser-precision guidance accuracy of the Guided Bomb Unit-10 (GBU-10) reduced the number of required aircraft sorties, providing higher aircraft survivability.¬† One example of the value of precision-guided weapons occurred in May 1972, when the United States attacked the Thanh Hoa Bridge in Vietnam. ¬†Over the previous 6 years, a staggering 871 aircraft sorties had dropped unguided bombs on the bridge (resulting in the loss of 11 aircraft) but had failed to close it. ¬†However, the Ô¨Ārst operational application of laser-guided bombs (dropped in four sorties) resulted in direct hits on the supporting piers, successfully closing the bridge with no loss of aircraft. ¬†More recent examples of the growing use of precision strike weapons are their applications in Operation Desert Storm (1991), where 9% of the strike weapons were guided weapons; Kosovo (1998‚Äď1999), where 35% of the strike weapons were guided weapons; and Operation Enduring Freedom (2002), where 69% of the strike weapons were guided weapons.

Also in 1972, the development of low observables Short Range Attack Missile (SRAM) provided a higher capability for missile survivability, a greater number of targets killed per bomber, and enhanced bomber survivability. ¬†SRAM provided the B-52 and B-1 bombers with enhanced survivability for standoff attack against defended targets.

The introduction and development of Ramjet propulsion in 1982 of SS-N-22 Sunburn led to the capability of time-critical attack of ship targets, with enhanced missile survivability from high-speed flight, high stratospheric altitude flight, and long-range standoff.

The initial operational capability (IOC) in 1985 of the ground-to-air Stinger‚Äôs two-color infrared/ultraviolet (IR/UV) seeker led to better target acquisition in clutter and better countermeasure resistance. ¬†Introduced in Afghanistan in 1986, Stingers shot down more than 200 Ô¨Āxed-wing aircraft and helicopters.

In 1987, the proven thrust vector control (TVC) of the AA-11 Archer led to large off-boresight, reduced time for Ô¨Āring, and enhanced capability against maneuvering aircraft. ¬†This capability provided a high lethality and exchange ratio in short-range air-to-air combat, as well as made the U.S. AIM-9L Sidewinder aerodynamic control missile obsolete.

The proven global positioning system/inertial navigation system (GPS/INS) guidance of the Joint Direct Attack Munition (JDAM) led to a low-cost adverse weather Ô¨Āre-and-forget precision strike weapon in 2000. ¬†And as of 2013, more than 250,000 JDAMs have been produced, with more than 20,000 dropped in combat.

In 2001, kinetic hit-to-kill accuracy of the Patriot Advanced Capability-3 (PAC-3) led to high lethality for terminal ballistic missile defense, and PAC-3‚Äôs were used to successfully destroy threat ballistic missiles during Iraqi Freedom in 2003.

Likewise, the exo-atmospheric accuracy of the Standard Missile-3 (SM-3) led to a capability for long-range/high-altitude missile defense in 2002, and the SM-3 demonstrated the capability to destroy a satellite, with limited debris, in 2008.

In 2010, the advent of meteor-ducted rocket air-breathing propulsion demonstrated a standoff air-to-air capability with more than twice the range of the Advanced Medium Range Air-to-Air Missile (AMRAAM), which has conventional rocket propulsion.

Finally, the development of the lightweight, low-cost Advanced Precision Kill Weapon System (APKWS) in 2012 showed the accuracy and range of the Hellfire missile at a fraction of the Hellfire‚Äôs weight and cost.

As shown in Figure 2, the frequency of a follow-on program is every 24 years or so for most U.S tactical missiles. ¬†Once a missile is in production, it usually has a long lifetime, including block upgrades. ¬†Block upgrades often incorporate the emerging new technologies in electronics, sensors, and propulsion and are also often necessary for new launch platform integration. ¬†However, eventually a capability is needed that is not easily achievable through a block upgrade, requiring a new competitive follow-on missile development.

Examples are shown in Figure 2 of the driving requirements for ATA, ATS, STS, and STA follow-on missile programs. ¬†The driving requirements are the improved maneuverability of AIM-9X; the autonomous seeker, lighter weight, higher speed, and longer range of the AIM-120 AMRAAM; the higher speed and longer range of the AGM-88 High Speed Anti-Radiation Missile (HARM); the improved response, logistics, and safety of the solid propellant M26 Army Tactical Missile System (ATACMS) and the MGM-140 Multiple Launch Rocket System (MLRS) tactical ballistic missiles; the improved accuracy (hit-to-kill) of the PAC-3; the higher gunner survivability (lower observables, launch-and-leave), lethality, and lighter weight of Javelin; and the combined robustness of lower cost, longer range, and reduced observables of the Joint Air-to-Surface Standoff Missile (JASSM). ¬†It is interesting to note that in almost no case does a U.S. missile follow-on program go to the incumbent contractor of the current missile.

Unguided-to-guided missile conversion kits have offered great promise for reducing the cost per precision strike engagement by as much as 75% for a certain class of targets.¬† However, because of industry circumstances, only international customers have ordered the systems so far and only one new U.S. missile program has been able to surpass the engineering and manufacturing development (EMD) acquisition milestone between 2000 and 2016. ¬†This missile, the APKWS II, is manufactured by BAE and comprises a guidance package added to a converted 70-mm unguided rocket that has been in use since the 1960s. ¬†Other companies, such as Lockheed Martin (Dager), Orbital ATK (GATR), and Raytheon (Talon), have invested heavily in developing comparable technology, but none of these systems has a U.S. program of record.

Current supersonic/hypersonic air-breathing missiles are shown in Figure 3. ¬†Except for the SS-N-19 Mach 2.5 turbojet, the missiles use either ducted rocket or liquid fuel ramjet propulsion. ¬†Current missiles use either a nose inlet or aft inlets. ¬†Missiles with a nose inlet are the United Kingdom Sea Dart, the Russian SS-N-19 and SS-N-26, and India BRAHMOS. ¬†Missiles with aft inlets are the United Kingdom Meteor; French Anti Navire Supersonique (ANS) and Air Sol Moyenne Portee (ASMP); Russian AS-17/Kh-31, Kh-41, SS-N-22/3M80, and SA-6; Chinese C-101 and C-301; and the Taiwan Hsiung Feng III. ¬†Notably, the United States has no high-speed air-breathing missiles. 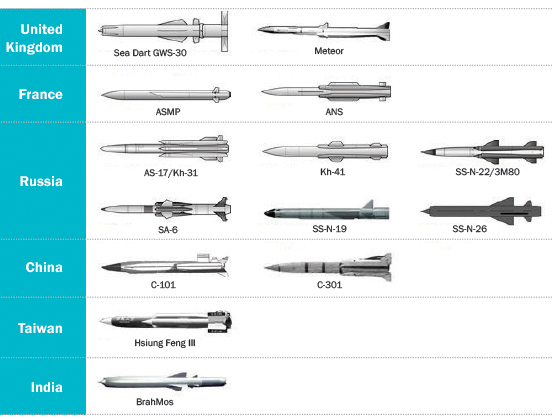 As shown in Figure 4, the United States did have numerous strategic missile follow-on programs during the Cold War. ¬†The liquid propellant Atlas and Titan ICBMs were replaced by the solid propellant Minuteman, which has faster launch response time and higher survivability. ¬†Minuteman also has better guidance accuracy. ¬†The Polaris SLBM was replaced by Poseidon, which had higher firepower, using multiple independent reentry vehicles (MIRVs). ¬†Poseidon was replaced by Trident, which has longer range and better accuracy.

In the area of naval strategic cruise missiles, the relatively small-size/high-firepower, high-readiness, and high-accuracy BGM-109 Tomahawk replaced the Regulus missile. ¬†In addition, there may be opportunities for a new start for a U.S. strategic cruise missile in the post-2016 time frame. ¬†Possible examples include a liquid fuel ramjet missile, which would provide faster time-to-target and potentially improved survivability over the current subsonic cruise missiles (BGM-109, AGM-86).

For a strategic missile, the time interval to a follow-on program is likely to be longer than that of a tactical missile (and is often influenced by political considerations).¬† For example, Minuteman III (EMD year 1966) and Trident (EMD year 1968) have not yet had follow-on programs. ¬†A partial follow-on to AGM-86 ALCM, the AGM-129 reduced radar cross section (RCS) missile, was terminated. ¬†

As shown in Figure 5, current U.S. defense funding (as a fraction of total U.S. federal funding) is the lowest it has been since just before World War II.¬† This low emphasis on spending and development poses a significant challenge for DoD development programs, including missile development programs. 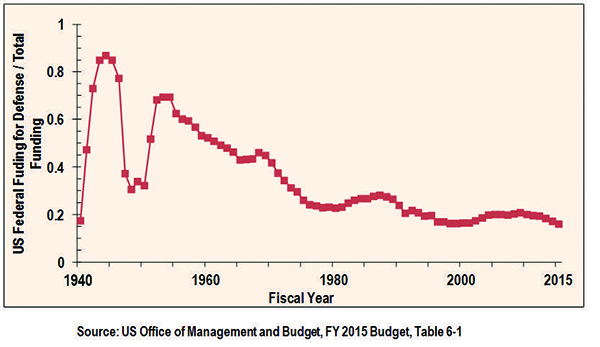 Going forward, there are numerous high-payoff, enabling technologies that are now, and will likely continue to be, critical to ongoing missile system development.¬† These technologies are summarized in Figure 7 and detailed in the paragraphs that follow.

If the U.S. military is to continue the capability transformation that missile development has provided over the last half century or so, it must continue to invest in the research and development of technologies to enhance the speed, accuracy, and destructive power of these weapons. ¬†System engineering trades will continue to be important for missile concept development‚ÄĒincluding all the aforementioned technologies‚ÄĒand must be unbiased, creative, and iterative with defined evaluations. ¬†In addition, the conceptual development effort should have a mission/scenario/system definition, weapon system requirements trade studies and sensitivity analysis, launch platform integration, weapon concept design sythesis, and technology assessment and development roadmap. ¬†Moving to a 3- to 9-month design development cycle is also recommended, with the development effort determining the driving parameters for each missile figure of merit. ¬†This determination will involve translation of customer requirements to engineering design characteristics. ¬†Finally, hardware experiments must be designed to efficiently evaluate the aforementioned technologies used in the weapon design. ¬†Evaluation of emerging missile technologies will also require advanced modeling and simulation to provide a cost-effective method that supports missile maturation throughout the weapon system‚Äôs life cycle. ¬†Ultimately, the main attributes of a new or enhanced missile system concept will be lethality, survivability, agility, versatility, deployability, and affordability for defense against both current and future threats.