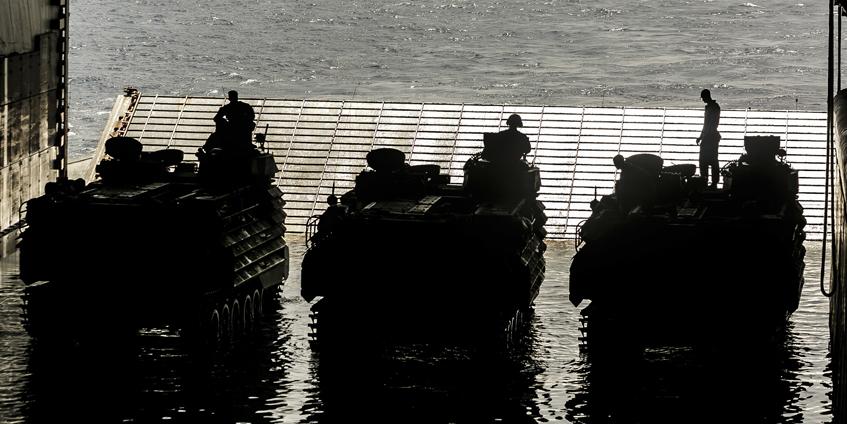 Mission readiness at a U.S. Air Force base involves more than just the aircraft. It encompasses everything involved in getting the aircraft and airmen successfully off the ground, including maintaining the airfield damage repair (ADR) vehicles used to keep runways in good condition. These ADR vehicles include hundreds of vehicles associated with street repair—front-end loaders, graders, dump trucks, street sweepers, water trailers, forklifts, and asphalt and concrete spreaders. Though not needed on a regular basis, they must be kept in ready-to-use condition. The challenge is maintaining ADR vehicles stored in open fields in highly corrosive conditions on bases throughout the Pacific. In these environments, sea spray, dust, high winds, and other harsh elements take a toll on the ADR fleets, multiplying repairs and shortening vehicle service life.

Equipment preservation was once part of the vehicle maintenance budget throughout the Pacific. However, when budget cuts hit, preventative maintenance also suffered, leaving bases to deal with the resulting corrosion. In general, this meant more repairs, more downtime, and more labor and material costs. It is not uncommon for vehicles to start rusting after just a few months on base. According to Technical Sergeant Justin Petty in charge of the 18th Logistics Readiness Squadron at the Kadena Air Force Base in Okinawa, Japan [1], if these vehicles are not treated for corrosion, they will need repair within a year after painting (5–7 years are usually needed for full repainting). Often, corrosion repairs must be performed on vehicle bodies for them to reach their 17-year life expectancy.

It is not uncommon  for vehicles to start rusting after just a few months on base.

Because of the high costs and toll corrosion takes on ADR fleets, TSgt. Petty began a search several years ago to find a corrosion-preventative solution for the $20 million ADR vehicle fleet recently purchased by the base. A successful search would result in a product or system that would protect ADR vehicles during their constant exposure to harsh environments, ward off the costly and debilitating effects of corrosion, and leave the vehicles ready for use at a moment’s notice.

Petty’s research brought him into contact with Larry Mudd, a retired U.S. Air Force vehicle maintainer turned senior project manager of preservation and field services at a company specializing in corrosion-inhibitor manufacturing and application [2]. Mudd was familiar with vehicle corrosion problems faced by the Pacific Air Forces (PACAFs) and helped them tailor an appropriate solution for their needs. The system was designed to slow vehicle corrosion in the aggressive Pacific atmosphere while maintaining the ADR fleet in mission readiness. The preservation program aroused much interest not only at Kadena but at other PACAF bases as well.

TSgt. Petty’s main concern other than corrosion protection was that the chosen product and/or system would allow the equipment to start up and be used at a moment’s notice without unwrapping film. Mudd helped the base develop a strong corrosion protection plan [2] within Petty’s mission-ready requirements. Rather than wrapping the vehicles in anticorrosion film, the new plan implemented a clear water-based coating that left a very thin and unnoticeable protective layer over the equipment’s original finish. Two other temporary water-based coatings and one solvent-based, anticorrosion coating were strategically designated for other vehicle components, such as wheel wells and grader buckets.

In addition to protecting vehicle bodies, the preservation system also focused on details—keeping smaller components, such as electronics, electricals, and moving parts, in good condition. Applying corrosion inhibitors to these less-obvious systems helps minimize future repair and failures from, for instance, an electrical wire shorting out and needing replacement.

The new plan would allow the base to maintain a mission-ready system while reducing the amount of repair and labor costs required when the equipment is otherwise allowed to deteriorate. Due to the nature of the products, no extra work would be needed to get a vehicle back into circulation. Mudd explained, “All the suggested or recommended products will allow them to just go out and . . . get in it and drive it away with no prep, no cleanup, no preparation to be mission ready—you just turn the key and go” [3].

Heavy equipment contains many electronic or electrical components and sometimes even their own electrical control boxes. To discourage premature failure from the corrosive environment, a corrosion-inhibiting electrical spray that dries quickly into a thin, dry film was designated for metal electrical components, such as wiring, battery connections, sensors, relays, and electrical motors. Vapor corrosion inhibitor (VCI) emitting devices (see figure 1) that release a corrosion-inhibiting vapor were assigned for fuse boxes or electrical enclosures under dashboards. When left in an enclosed space, the VCIs form an invisible protective film on metal surfaces. The invisible film discourages the normal corrosion reaction of metal with air, moisture, and chlorides from taking place. The VCIs also have the advantage of protecting intricate and hard-to-reach spaces that a spray-on film might miss.

The VCIs also have the advantage of protecting intricate and hard-to-reach spaces that a spray-on film might miss.

Standard lubricants and greases naturally provide a degree of corrosion protection by protecting the metal surface from direct interaction with air and moisture. However, in extreme conditions like those on Pacific bases, a more powerful strategy is to use lubes and greases enhanced with corrosion inhibitors for additional protection. The new preservation program at Kadena includes applying a wet film corrosion-inhibiting lubricant to all moving parts—hinges, lift cylinders, pintle hooks, etc.

Extra pressure lithium grease enhanced with corrosion inhibitors was selected for grease zerks. Fuel systems are treated with a corrosion-inhibiting additive that protects at a low dose and provides a degree of protection to spaces above the fuel level.

To protect heavy equipment bodies and paint jobs without impeding use, a special water-based, corrosion-inhibiting, permanent coating that dries to a thin, clear, matte film was selected. The coating, which could be applied directly over the original vehicle paint, contains special organic corrosion inhibitors that enhance the corrosion protection of the water-based coating and increase the overall protection of the vehicle coating system. The clear coating is expected to provide protection for several years and minimize the frequent need for repainting while allowing free movement of the vehicles, which could be turned on at any moment and driven away for airfield repair work. According to Mudd [3], touch-up work or coating reapplication may be needed at times; however, overall corrosion maintenance should be significantly reduced.

A separate clear but removable, corrosion-inhibiting, water-based coating would be applied to wheel wells, firewall surfaces, and underneath the engine compartment. The coating can be left on or removed with an alkaline wash. Dump truck beds, forklift tines, grader blades, and similar surfaces were designated for protection with a corrosion-inhibiting coating that leaves a peelable layer with a texture like fruit leather. This coating provides some abrasion protection in addition to being corrosion resistant. If necessary, the coating can be peeled off and simply thrown in the trash as solid waste.

Where equipment already started to rust, rust removal or using a primer that converts rust into a passive layer was recommended before applying the protective coating.

Before implementing the new program, the suggested products had to first pass a long review process with the Hazardous Materials Office to permit their use on the island base. This was approximately 1 and 1/2 years from the time the base contacted Mudd in November of 2015 to the time he came on base for hands-on training in the spring of 2017 [3]. Since the system was already reviewed at Kadena, implementations at other bases should be much quicker.

Mudd conducted a 2-day training to introduce the materials and provide application instruction for achieving the best possible protection on the 200-plus vehicle fleet. The base supplied two pieces of equipment—a front-end loader and a compact track loader—for the hands-on training. Mudd showed how to apply products correctly, demonstrated good spray techniques for the coatings, and stressed proper use of personal protective equipment where designated by product safety data sheets (see figure 2).

Before applying the corrosion inhibitors, Mudd performed a walk-around inspection to make sure everything was clean, masked off, or accessible. The next step was to pressure wash the vehicles with an alkaline cleaner containing flash rust inhibitors (a clean surface free of debris is critical to achieving good coatings performance). After the vehicles dried, Mudd did another walk-around and showed how to apply the electrical coating on electrical components and the anticorrosion lube to grease zerks. All moving parts were then sprayed with the corrosion-inhibiting lubricant.  After all these products were dry, the clear, nontacky, temporary coating was applied to appropriate surfaces in the engine compartment (see figure 3), around firewalls, and on wheel wells and allowed to dry. All windows, hoses, fittings, registration numbers, and other critical areas were masked off (note masked areas in figure 4) before applying the thin matte finish, anticorrosion, clear coat over the equipment’s vehicle paint. The clear coatings were applied directly over the vehicle finish to provide corrosion protection while leaving the vehicle unencumbered and ready to use. Representatives of several other air bases, such as Andersen in Guam and Misawa in Japan, were also present to observe the new protective strategy training. Where appropriate, equipment parts, such as buckets and grader surfaces, were coated with a peelable coating. Additional protection was later added to the electrical boxes, near fuses, and underneath dashboards by sticking VCI emitter cups into the enclosed areas.

PROJECTED RESULTS OF THE NEW PROGRAM

It is estimated that the corrosion control project could save more than $20 million and extend equipment service life by 5–7 years [4]. The squad will go out every 6 months for a full inspection and reapply the system as needed. This maintenance work is expected to require far fewer labor hours and repair costs than frequent vehicle rework required when no corrosion prevention is applied. Because of the program’s corrosion-protection and cost-savings potential, TSgt. Petty decided to create a technical application manual for future reference for squads who want to apply the anticorrosion system. The program has also been shared with other Pacific air force bases, such as Andersen; Misawa; and Yokota, Tokyo, where the corrosive Pacific environment also begs for a mission-ready corrosion protection program. The preventative maintenance aspect of the program also makes it a good candidate for implementing stateside to preempt corrosion before vehicles are shipped out to the corrosive Pacific base environments.

The corrosion control project could save more than $20 million and extend equipment  service life by 5–7 years.

Special thanks to Larry Mudd of Cortec Corporation for relating his experience of designing and implementing a corrosion control system for Kadena’s ADR fleet. Thanks also to Cortec Tech Service Engineer John Wulterkens for technical review of this article.