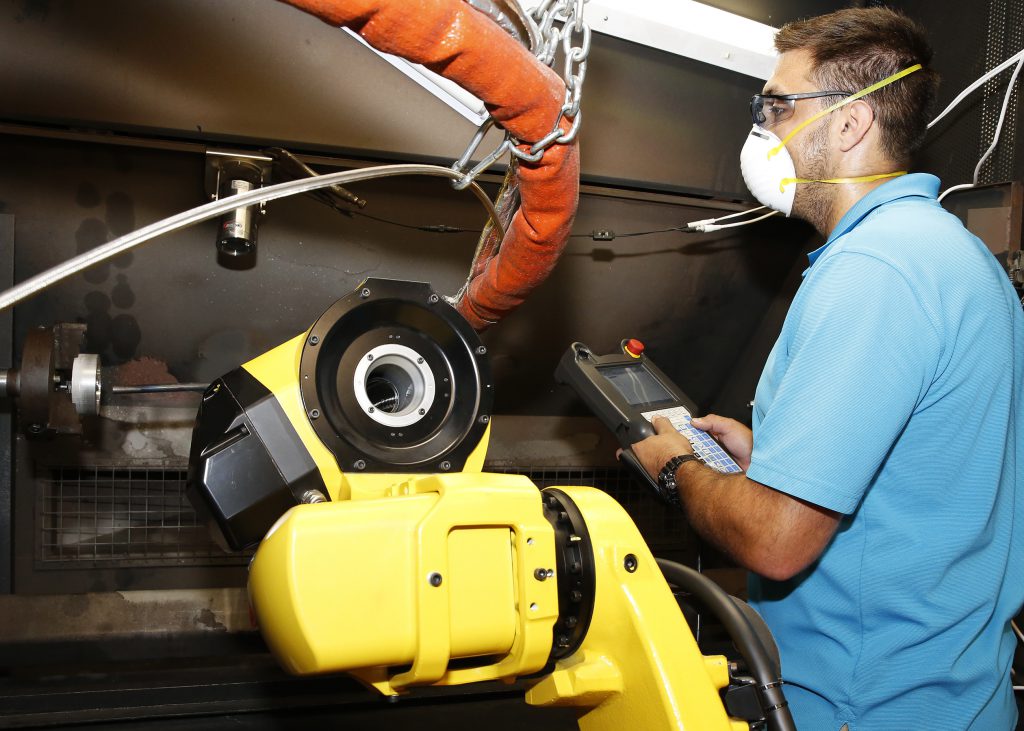 “It was decided a year ago that there would be weld repairs on the seawater check valve disks for the Bush project,” said Code 930 Trades Manager Nicholas Allen. “The Inside Machine Shop (Shop 31) and Welding Shop (Shop 26) did the prep work and got the repair done. However, in the process of it, the flapper actually bowed. This prompted some hesitation to correct the bow with welding and the shipyard was looking for solutions for how to make this repair as quickly and as durable as possible.”

The shipyard has been working to establish its cold spray program since 2016, so the team members threw their hats into the ring as a possible solution for the bowed part. Once approved, the team hit the ground running, preparing for this new endeavor.

“Cold spray is an additive repair process where powdered metal is mechanically bonded to a base material after passing through a nozzle at supersonic speed via a heated carrier gas,” said Code 265 Submarine Mechanical/Piping Branch Head Daniel Stanley. “The cold spray process occurs at significantly lower temperatures than traditional repair methods such as welding and thermal spray. In respect to shipyard applications, cold spray has the potential to repair components previously deemed beyond capable repair as well as provide more durable repairs for those items previously epoxy/electroplate repaired. With our Cold Spray Booth now established in Bldg. 163, we were ready to move forward with what repair efforts we could offer.”

“When we began to plan out our procedures for the job, it looked like a straightforward operation; however, we quickly learned that this was a far more complex job than we had ever done at NNSY,” said Allen. “There were complex angles and low areas we had to maneuver to ensure an even and consistent cold spray application to the part.”