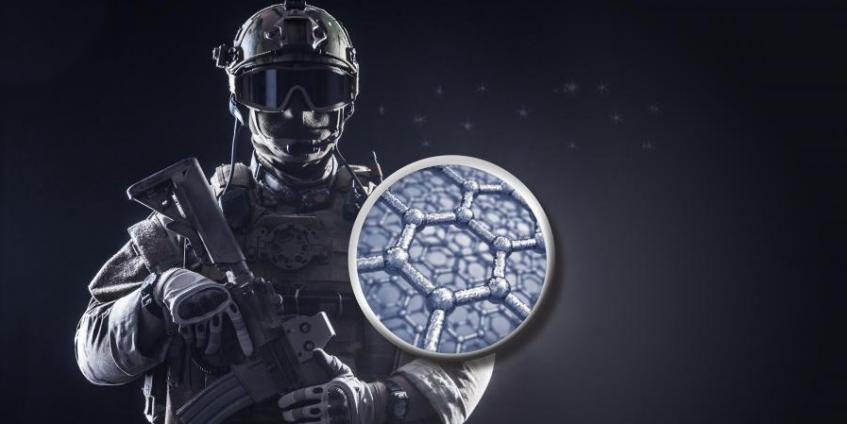 Though the name might not be familiar to many, graphene has been heralded as a “miracle material,” the application of which includes:

In addition, based on recent research, graphene is turning out to be an exciting advanced material, promising advantages in two particular areas for the military: (1) survivability/force protection, and (2) increased battery storage capacity. For the first area, graphene’s potential as ballistic armor material has become more evident from mechanical strength investigations. For the second, research of graphene’s comparatively high conductivity is leading directly to better energy density in battery storage.

Graphene is a 1-atom-thick layer of tightly bonded carbon atoms arranged in a hexagonal lattice (Figure 1). It is a single atomic layer of graphite (which is used, among other things, for pencil tips). Graphene is special because of its sp2 hybridization and extremely thin atomic thickness (0.345 nm), properties that make it remarkably strong (about 200 times stronger than steel) as well as an excellent conductor of heat and electricity. The carbon-to-carbon bonds in graphene are so small and strong that they prevent thermal fluctuations from destabilizing it. In addition, the material is extremely diverse and can be combined with other elements (including gases and metals) to produce different materials with a range of superior properties.

Figure 1:  Graphene Is an Atomic-Scale Hexagonal Lattice Made of Carbon Atoms (Credit: AlexanderAlUS via Wikimedia Commons).

The tight lattice of graphene has extremely short (0.142-nm-long) carbon bonds, which gives it its inherent strength. With an ultimate tensile strength of 130 GPa, graphene is the strongest material ever discovered. For comparison, A36 structural steel has a 0.4-GPa and Aramid (Kevlar) has a 0.37-GPa ultimate tensile strength. Graphene is also extraordinarily light at 0.77 mg/m2, which is roughly 1,000 times lighter than 1 m2 of paper. It is often said that a single sheet of graphene (being only 1 atom thick) sufficient in size to cover a whole football field would weigh less than 1 g [1].

Graphene also contains elastic properties, being able to retain its initial size after strain. In 2007, atomic force microscopic (AFM) nanoindentation tests were carried out on graphene sheets that were suspended over silicone dioxide cavities. These tests showed that graphene sheets (with thicknesses of between 2 and 8 nm) had spring constants in the region of 1–5 n/m and a Young’s modulus of 0.5 TPa. But more recently, graphene’s in-plane Young’s modulus was measured to be more than 1.0 TPa, also using AFM nanoindentation [2].

Graphene’s lightness and strength have been thought to be a potentially good fit for ballistic protection for some time. In military applications, lighter armor material provides for greater mobility and increased range for the same level of protection.

Researchers from the University of Massachusetts in Amherst studied the way graphene absorbs kinetic energy and discovered that it might be extremely efficient in preventing bullet penetration [3] (Figure 2).

The researchers constructed a miniature ballistics test using a laser pulse to superheat gold filaments until they vaporized, which simulated gunpowder firing a micrometer-sized glass bullet. The researchers tested at impact velocities of 6,000 m/s and 9,000 m/s into sheets of graphene that ranged from 30 to 300 layers.

The scientists found that graphene sheets dissipated the kinetic energy by stretching into a cone shape at the bullet’s impact point, then cracking outward radially. Despite those cracks, the material still performed twice as well as Kevlar and endured 10 times the kinetic energy that steel can. In microscale, the behavior of graphene to stretch into a cone before projectile penetration is eerily similar to that of fabric materials—such as Kevlar and Zylon—used in ballistic protection (as shown in Figure 3).

Ballistic tests had previously been done on fabric to measure fabric displacement (h), along the axis of impact and the radius (R) of the fabric deformation or “bulge,” as a function of time. As a result, Walker [4] was able to develop an analytical model for the dynamic response of fabrics to ballistic impact. In the model, the force, F, on the bullet is a function of h and R.

Y is the fabric Young’s modulus, and T* is the fabric effective thickness. Relationships were also found between the target/projectile density ratio and normalized V50. With test data, this analytical curve fit is shown in Figure 4, where

Table 1 compares material properties between graphene and Kevlar, traditional ballistic fiber. For graphene, metrics normally used for fabric were calculated for comparison. We see straight off that graphene properties are impressive, in particular for Ep, the net energy required to penetrate the material.

Because tensile mechanical stresses in a material cannot be transmitted faster than the speed of sound [c~(Y/ρ)1/2], the nonequilibrium local stress arising from the inertial effect becomes important under dynamic conditions accompanying high-strain-rate, predominantly tensile loading [5]. The relatively low density (~2,200 kg/m3) of graphene [6], along with its high modulus, leads to a superior in-plane speed of sound (c~21.3 km/s, compared to Kevlar at 9.5 km/s), implying that concentrated stresses applied under extreme conditions can rapidly be delocalized.

Looking at graphene values for V* in relation to X, and looking at Figure 4 for Kevlar, we can get a sense that V50 could be quite high for graphene compared to Kevlar. V50 for graphene has not been tested yet.

Table 1: Comparison of Graphene and Kevlar Under Projectile Impact Testing [3]

In separate research, at the City University of New York (CUNY), it was shown that two layers of graphene exhibit a transverse stiffness and hardness comparable to diamond [7]. At room temperature, the two-layer graphene construct was resistant to perforation with a diamond indenter and showed a reversible drop in electrical conductivity through indentation and release. The researchers used atomistic computer simulations to model potential outcomes when pressurizing two layers of graphene aligned in different configurations. Subsequent validation tests agreed with the simulations. Daimene, as the construct has been dubbed, is as flexible and lightweight as foil but becomes stiff and hard enough to stop a bullet on impact. Experiments and theory both show that this graphite-diamond transition does not occur for more than two layers or for a single graphene layer. No actual ballistic impact testing was conducted on Diamene.

Graphene is a zero-overlap semimetal with extremely high electrical conductivity. Both holes and electrons act as charge carriers. Carbon atoms have a total of six electrons; two in the inner shell and four in the outer shell. The four outer-shell electrons in an individual carbon atom are available for chemical bonding, but in graphene, each atom is connected to three other carbon atoms on the two-dimensional (2-D) plane, leaving one electron freely available in the third dimension for electronic conduction.

Tests have shown that the electronic mobility of graphene is extremely high, with previously reported results above 15,000 cm2/V•s and theoretically potential limits of 200,000 cm2/V•s. It is said that graphene electrons act much like photons in their mobility due to their lack of mass. These charge carriers can travel submicrometer distances without scattering, a phenomenon known as ballistic transport. However, the quality of the graphene and the substrate that is used are limiting factors. With silicon dioxide as the substrate, for example, mobility is potentially limited to 40,000 cm2/V∙s [1].

Conventional battery electrode materials are significantly improved when enhanced with graphene. Graphene can make batteries light, durable, and suitable for high-capacity energy storage; and it can shorten their charging times. Battery life-time is negatively linked to the amount of carbon that is coated on the material or added to electrodes to achieve conductivity. Graphene adds conductivity without requiring the amounts of carbon that are used in conventional batteries.

The military continues to advance the use of electronics in missions, and these electronics are normally battery-powered. Increased longevity of stored battery power for the same weight—or, alternatively, the same storage capacity in a lighter package—enhances overall military capability. Reduced weight will either add increased range or allow increased weight in another important component, such as armor. In addition, longer battery life decreases likelihood of mission failure from loss of battery power.

Graphene can also improve such battery attributes as energy density. Lithium-ion (Li-ion) batteries can be enhanced by introducing graphene to the battery’s anode and capitalizing on the material’s conductivity and large surface area traits to achieve morphological optimization and performance.

It has also been discovered that creating hybrid materials can also be useful for achieving battery enhancement. A hybrid of vanadium dioxide (VO2) and graphene, for example, can be used on Li-ion cathodes and grant quick charge and discharge as well as large-charge-cycle durability. In this case, VO2 offers high-energy capacity but poor electrical conductivity, which can be solved by using graphene as a sort of a structural “backbone” on which to attach VO2— creating a hybrid material that has both heightened capacity and excellent conductivity.

Another example is lithium iron phosphate (LFP) batteries, which are a type of rechargeable Li-ion battery. These batteries have a lower energy density than other Li-ion batteries but a higher power density (an indicator of the rate at which energy can be supplied by the battery). And enhancing LFP cathodes with graphene allows the batteries to be lightweight, charge much faster than Li-ion batteries, and have a greater capacity than conventional LFP batteries.

In November 2016, Huawei Technologies unveiled a new graphene-enhanced Li-ion battery that can remain functional at higher temperature (60° as opposed to the existing 50° limit) and offers a longer operation time (double of what can be achieved with previous batteries). To achieve this breakthrough, Huawei incorporated several new technologies including antidecomposition additives in the electrolyte and chemically stabilized single crystal cathodes—and graphene to facilitate heat dissipation. Huawei claims that the graphene reduces the battery’s operating temperature by 5°.

There are dozens of companies that currently produce graphene (and graphene-based materials). While production volume is relatively small and prices are still high, commercial applications consistently emerge into the markets. Production volumes are predicted to increase, while prices are predicted to drop, enabling more and more products to use graphene-based materials. Mass production of large graphene sheets has not been achieved yet, but several companies are offering such materials in low volume.

The author would like to thank Mr. Ron Mertens, CEO and Editor-In-Chief of Graphene-info (http://www.grapheneinfo.com), for his technical guidance in writing this article.