HIVE: An Integrating Environment for Simulation and Analysis

A decade of organic growth and adoption has given rise to a modern platform for simulation development, integration, and analysis. Built into applications spanning analysis, training, and intelligence, the Hybrid Integration and Visualization Engine (HIVE) stands ready to change the way models and simulations are integrated within the Department of Defense (DoD). HIVE is a Government-owned project purpose-built for enterprise integration of modeling and simulation (M&S) assets for training and analysis (as indicated in the screen shot in Figure 1). As a core library with a large number of available plugins, HIVE allows the application of existing models and simulations originating to new environments while providing a reusable suite of simulation tools and visualizations. The engine has found application to multiple simulation domains and levels of fidelity, proving it is an agile and capable project for bringing down costs while promoting true model reuse.

At its core, HIVE has the capability to collect thousands of measurements from its environment. It allows for analysis on these metrics and can rapidly generate information from a diverse range of integrated components. This integration brings disparate models and data sources seamlessly into a unified environment with infrastructure already in place to talk to a network, visualize output, collect statistics, generate reports, and drive other external hardware and software.

HIVE’s integration capabilities bridge the gap between constructive and virtual simulations. As models are integrated within the engine as a plugin, the system matures a repository of objects and simulations, thus promoting true code reuse among integrated simulations. Each plugin then provides new functionality to existing applications without additional integration work. Integration with HIVE occurs with only minimal changes to an external model’s original source code. HIVE makes it possible for analysts to simultaneously execute multiple models (even with different frame rates and fidelities) to produce an integrated simulation environment while maintaining each component’s pedigree. For example, Figure 2 provides a notional visualization of a BlueMax aircraft acting as an airborne jammer, with the Enhanced Surface-to-Air Missile Simulation (ESAMS) driving a ground-based radar with antenna pattern and radar track cell, and with SHAZAM providing the endgame modeling. Data from all three of these models could be published over a Distributed Interactive Simulation (DIS) network.

The motivation for the design and implementation of the HIVE M&S framework stems from the desire to bring together various phases of mission planning, execution, and analysis and their constituent tools.

Too often programs tend to do point integration, bringing in a model only into its environment with little formal testing. These stove-piped integrations cannot react to external software upgrades and offer little to no benefit to any other software project. One of HIVE’s goals is to promote true software reuse; to provide correlation between the various tools, models, their inputs, and their outputs; and to foster rapid development of agile changes to mission configurations. As HIVE provides a common integration platform, individual models can maintain their own development processes and timelines. As models are upgraded, the corresponding HIVE plugin can be upgraded once, and all users of the plugin benefit. One simple illustration of this plugin component model is in HIVE data parsers. Table 1 illustrates many of the parsers available for different types of files within HIVE. Once a model is integrated into HIVE, it can immediately leverage all existing data file parsers.

As HIVE integrates with hardware, Booz Allen Hamilton integrated an Oculus DK2 virtual reality headset into HIVE to create a man-portable air defense system (MANPADS) simulator. While the DK2 interface was new, existing components for flight dynamics, signatures, sensors, missiles, and endgame were used to provide simulator capable of an engineering-level assessment of a MANPADS with less than a week of development time.

Simulation for Analysis and Decision-Making

The goal of M&S activities is ultimately to build knowledge. This knowledge is derived from data, which evolve into information, which evolves into knowledge through scientific analysis. With analysis as a goal, HIVE has a robust feature set for collecting and integrating data from all integrated components throughout a simulation’s execution. The data can be formatted HIVE plugins and relayed directly to an analyst in a ready-to-use format. A primary goal of this work is to eliminate the continual development of small tools and macros that clutter the analysts’ processes and tend to quickly become “dead code.” As HIVE is designed to aid the analyst, it provides a rich set of tools to pull data directly from all integrated components, including via XML inputs, Python scripting, or plug-in development.

Integration of models with HIVE provides several second-order effects. The first is that the integration provides the integrated model with access to all other HIVE components and simulations that pertain to its domain. For instance, HIVE has a full-featured interface to BlueMax, a pseudo-6-degree-of-freedom (DoF) flight dynamics model. Any integrated model could use these BlueMax aircraft for a source of aircraft flight dynamics data, such as targets for a missile or a platform for carrying a sensor. Future integration of models and simulations will be accessible to all integrated components without having to develop a completely new interface to that specific component. This functionality helps to multiply the value of implementing a mature HIVE interface.

Another of these second-order effects is providing access to modern data visualization (Figure 4). HIVE visualization tools provide an automatic integration of existing displays to existing models, as well as the opportunity to create new displays for the model. HIVE allows users to integrate or create videos of the physical environment, user interfaces, complex data visualizations, or any custom display. The tool provides abstracted data visualization for any integrated component. Under the hood, it uses common tools and architectures for driving the graphics, which means that there is wide industry support and technical knowledge. Reuse of third-party libraries and graphics components is possible while ensuring that user development of new components can be readily accomplished without significant specialized HIVE-centric knowledge.

The motivation to use Live, Virtual, and Constructive (LVC) simulations is found across the DoD. Running contrary to this approach is a significant library of models and simulations that were purpose-built to solve specific problems at various fidelities. HIVE allows its integrated models and simulations to work in constructive environments (e.g., doing Monte-Carlo simulations), virtual environments (e.g., interacting with users in real-time), and live environments (e.g., interacting with test range assets) all with the same toolset. This flexibility brings continuity and fidelity to acquisition, test, and training and provides for analogous comparisons across LVC domains using an identical tool set with identical data collection and analysis processes.

A dynamic build and distribution system allows for the size and complexity of a HIVE distribution to be tailored to its constituent model’s needs. Specifically, a small nongraphical version of HIVE can be used to provide integration between two models without bringing along unnecessary plugins or dependencies.

The software itself is controlled in a modern continuous integration environment that includes detailed issue and bug tracking. Several different configurations of HIVE (e.g., 32-bit, 64-bit, with graphics, without graphics, Windows, Linux w/GCC, Linux w/Clang, etc.) are built and tested daily. Tests include regression testing, functional testing, and performance benchmarking. These processes aim toward allowing HIVE to be a stable, mature, and rapidly deployable solution to cross-platform simulation integration and visualization.

For as long as HIVE has been in development, it has been providing a virtual cockpit for BlueMax. While HIVE’s graphics engine provides out-the-window and heads-down displays, its integration engine has the most mature interface to BlueMax available. HIVE’s test architecture has extensive integration tests within it for BlueMax which demonstrate perfect correlation between stand-alone BlueMax execution and defining scenarios within HIVE itself and running them within BlueMax, even for advanced waypoint and commanded control modes. Commonly used with a Thrustmaster Hands-On Throttle and Stick (HOTAS), the HIVE BlueMax cockpit (illustrated in Figure 5) supports multiple BlueMax players, multiple views of the scenario, and highly detailed data collection capabilities. 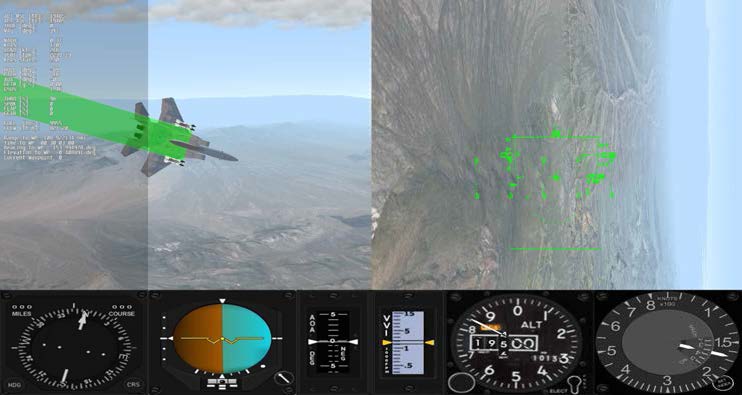 Figure 5: The Default BlueMax Cockpit in HIVE With Basic Flight Displays, a Heads-Up Display (HUD), and a Third-Person View of the Aircraft.

Starting in 2014, HIVE began to be integrated into JAAM to provide a link to ESAMS. ESAMS had long existed as a trusted model for high-fidelity SAM engagements, and HIVE had a mature interface to its capabilities. The idea was to use this existing, tested interface to provide ESAMS weapons to JAAM. Since this effort started, HIVE is now also providing access to the BlueMax6 pseudo-6-DoF aero-performance model. This is the first high-fidelity aero model integrated into JAAM and will be providing access to both domestic and foreign aircraft performance models in an upcoming release of JAAM.

Future efforts with this integrate may bring additional model integrations into HIVE that are used by JAAM. Such models include the Missile and Space Intelligence Center’s (MSIC) Threat Modeling and Analysis Program (TMAP) models; Standard TMAP Interface and Model Structure (STIMS) and STIMS2 interfaces, air-to-air models, and air-to-surface models.

Life from the Nellis Test and Training Range (NTTR)

Today, HIVE is tightly integrated with the NTTR, providing real-time kill removal and post-mission debriefing support for RED FLAG and other range activities. Working with the 507th Air Defense Aggressor Squadron (ADAS), HIVE was used to develop the Aggressor View application. Aggressor View provides a custom user interface on top of HIVE libraries (Figure 6) to access ESAMS. While ESAMS had traditionally been a constructive-only model employed by subject-matter experts, Aggressor View provides this high-fidelity capability to SAM assessors with little training required. Users have access to many advanced features within ESAMS, including its electronic attack (EA) capabilities. HIVE’s internal type manager automatically selects the proper antenna patterns, target signatures, available EA techniques, and other parameters to construct the ESAMS engagement. Endgame analysis is currently being provided by SHAZAM. Again, HIVE is used here to build up the proper inputs and data files for SHAZAM and to visualize the fragment fly-outs at end game.

Figure 6: An Aggressor View Window, Showing a Real-Time Range View and Controls for Playback and Video and Image Capture.

Aggressor View, via HIVE, provides both real-time kill removal and highly detailed post-mission debriefing support. The 507th ADAS has successfully used Aggressor View for more than 7 years to enhance its ability to provide SAM training and support for the NTTR with high-fidelity, validated threat models. In the future, HIVE is anticipated to provide additional models, such as the MSIC TMAP models of SAM threats. Also expected is the near-term integration of Endgame Manager to replace SHAZAM for providing detailed endgame analysis of engagements.

HIVE’s link to the NTTR’s live and post-mission data can be made available to any HIVE-integrated model. This capability can be used to bring traditionally constructive models (such as ESAMS) into the LVC environment with little or no modifications required to the model itself.

The beginning of FY16 will see the release of HIVE generation 8. The latest generation of HIVE boasts an improved and simplified core application program interface (API), reduced internal complexity, improved performance, and a completely new graphics implementation. This version of HIVE will continue to support RED FLAG exercises, integrating simulations into JAAM and aiding in the reusable integration and visualization of simulations within the DoD.