Lightening the Load for the Modern Marine 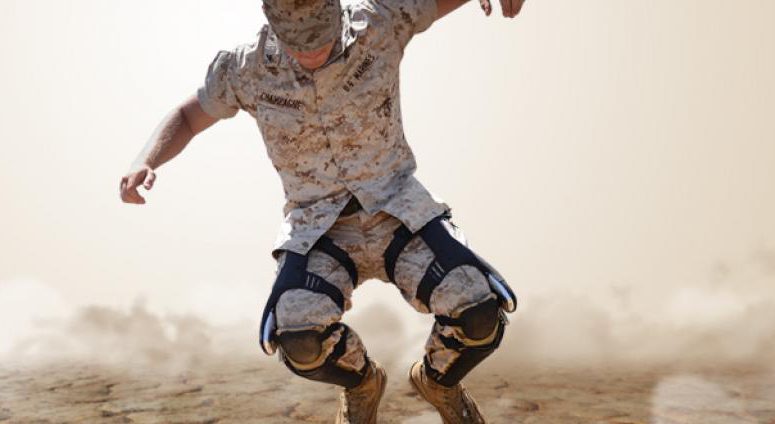 Dismounted U.S. Marines perform some of the most physically demanding missions, often requiring extensive situational awareness, overwhelming firepower, and considerable quantities of energy. Over the last 10 years, the Marine Corps has successfully achieved increased lethality and capability, but it has departed somewhat from its expeditionary, lightweight, fast-moving roots. Today’s infantry battalions consume significantly more energy than their counterparts did a decade ago. In fact, since 2001, Marine Corps battalions have experienced a:

Marines have also become critically dependent on fuel, battery, and water logistics/resupply. This dependence has resulted in increased personal risk on the battlefield, especially for those Marines, soldiers, and civilians hauling fuel and water. And it has exacted a high toll. One Marine or civilian is injured in every 50 fuel/water convoys [2], and a buried explosive incident occurs in every 17 convoys. Consequently, for the individual Marine, the increased dependency on energy has meant an increase in overall weight carried, increased injury, and an increased dependence on resupply.

A typical dismounted Marine carries up to 20 lbs of batteries, in addition to his combat load, and requires 3 gal of water a day in an arid environment [3], equating to approximately 75 lbs of water for a 72-hr mission. The batteries and water alone add significant weight to an already heavy load (see Figure 1). These items also constrain lines of communication and limit the marine’s ability to penetrate deeper into enemy territory. Accordingly, a practical solution is needed to address these problems. 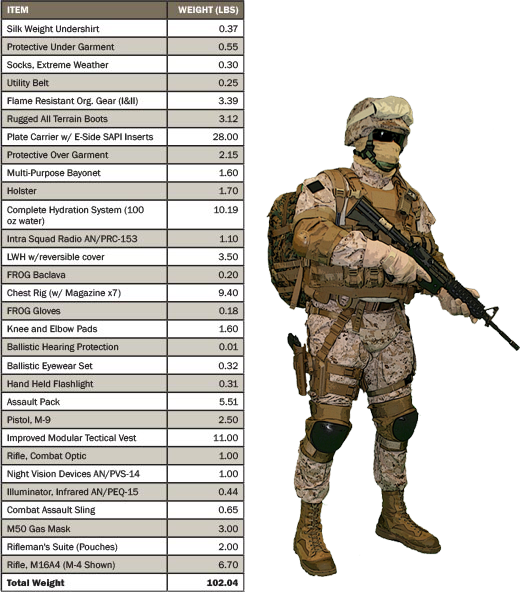 Traditional approaches to modernization have often been to develop and incorporate power-consuming material solutions into dismounted forces operations without fully considering the overall impact on the individual Marine. Conversely, when systems are developed for aircraft or vehicles, similar constraints are clearly specified. These constraints—which include factors such as maximum gross weight, center of balance, size, weight, and power—are largely absolute. Accordingly, subsystems are developed within the boundaries of established trade space. And the reason is simple: if aircraft are too heavy, they don’t fly. Likewise, if the weight on Marines is too heavy, they either function at a reduced capacity, or they break.

The Services have attempted to address the weight and power problem by developing lighter technologies, higher-energy density batteries, and renewable technologies. However, individual materiel prototyping has failed to deliver the widespread acceptance needed for adopting renewable energy-harvesting technologies, which are currently demonstrating the potential to significantly reduce the battery weight and resupply requirements of Marine Corps units.

To effectively provide energy solutions to the Warfighter, developers need to fully understand the energy consumption requirements. In the past, attempts to specify power requirements were performed simply by reviewing product data sheets and adding up the total power to determine the requirements. This approach has not accurately captured the tactical environment power usage profile for an individual up to the company level. For example, the PRC-117G radio has a specified power requirement of 55 W in one mode, but what is not specified is the power requirement for other operational modes, the duty cycle, and the length of time an operator will use it in each mode during various missions.

At an institutional level, the joint Services sometimes appear to have a questionable understanding of the actual power requirements and usage profiles that are necessary for a company in a tactical environment. This deficiency, along with the myopic evaluation of each individual technology solution, contributes to unchecked increasing power demands and, ultimately, an uninformed acquisition process. Instead of viewing each piece of technology individually, each piece should be evaluated against the individual, squad, platoon, or company “as a system,” much like the requirements for the preceding aircraft example.

The Army has started using this approach with the creation of the Soldier as a System (SaaS) concept. This systems engineering approach ensures that requirements such as the maximum weight that the individual through the company (as a system) can carry, as well as individual- to aggregate-unit-level power requirements, are considered. Capability developers have suggested that dismounted Warfighters are considerably less effective when saddled with 190-lb loads and excessive power requirements. However, we continue to observe increasing weight and power requirements due to stove-piped technology development processes and organizations within the Services that are not using an SaaS approach.

TWO-PRONGED APPROACH TO SOLVING THE PROBLEM

The DFER-IPT is challenged with developing, promulgating, and incorporating energy-specific attributes for capabilities integration officers (CIOs) whose requirements result in solutions that are carried/employed by, or interface with, dismounted forces. The desired end state is to lighten the individual Warfighter load, improve energy performance, minimize the burdens of tactical resupply, and reduce overall costs to the Department of Defense (DoD).

The ESWG will provide the applicable guidance and determine the energy sustainment requirements that developers must consider, with respect to architecture and performance, to ensure future systems are integrated; impose the least possible physical burden for dismounted forces; minimize logistical resupply; and facilitate the harvesting, regeneration, and/or scavenging of energy.

The MSSWG will recommend mobility metrics for worn and carried dismounted forces power systems, as well as metrics to control hazards to the individual and retain dismounted forces survivability through testable system performance measures.

Lastly, the EMWG will assist the IPT and requirements and acquisition professionals with defining energy performance considerations early in the development of new equipment and upgrades to legacy capabilities.

Together, these working groups will tackle a significant problem and in the end provide constraints that will bound the size, weight, and power requirements of future dismounted systems. The DEFR IPT is targeting the middle of fiscal year 2016 to wrap up its efforts.

The JIC-P (illustrated in Figure 2) is a joint effort between the Army and the Marine Corps (led by the Marine Corps Expeditionary Energy Office [E2O]) that is planned to address many of the problems discussed herein. The 18–24-month effort is aimed at lightening the load and reducing the size, weight, and power requirements of dismounted systems. It will provide the Marine expeditionary rifle company with a unique, self-sustainable capability set that enables dismounted multi-day operations in an austere environment while informing the DFER-IPT. The program will include a company concept of operation development, modeling, technology development, integration, and large-scale testing and evaluation. 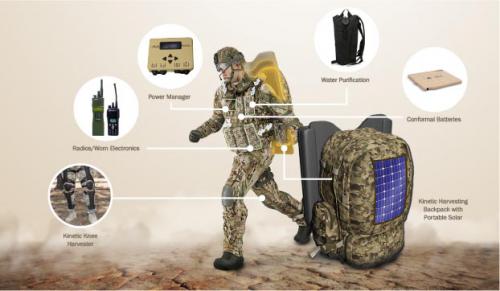 The evaluation will start small but grow to include a side-by-side evaluation of 25 Vest Power Managers (VPM) and 25 Integrated Soldier Power and Data Systems (ISPDS) with 50 kinetic-energy-harvesting backpacks, 50 kinetic-energy-harvesting knees, 50 lightweight photovoltaic panels, and 100 conformal rechargeable batteries. A side-by-side comparison of the Marine Corps VPM and the Army ISPDS will inform the joint community and play a crucial role in determining the future small unit power architecture for the Marine Corps. This effort will be accomplished through a collaborative partnership between the Naval Surface Warfare Center Dahlgren (NSWCD), the Natick Soldier Research and Development Engineering Center (NSRDEC), the Army, and the Marine Corps.