Recently, Lockheed Martin and several Government and industry partners (including the U.S. Army Tank Automotive Research, Development and Engineering Center [TARDEC]) achieved several important milestones in the development and demonstration of autonomous ground vehicles. On the autonomous appliqué side, developers successfully demonstrated driver-assisted and semi-autonomous convoys of military logistics trucks operating at speeds up to 45 mph and with convoys as long as seven vehicles. Likewise, in the area of off-road missions, a fully autonomous reconnaissance and logistics mission was demonstrated using an unmanned aerial vehicle (UAV)/UGV pair. These accomplishments, along with numerous others, continue to prove the maturity and near-term applicability of these types of autonomous solutions.

Two examples of major UGV systems currently being developed and tested by Lockheed Martin are the Autonomous Mobility Appliqué System (AMAS) and the Squad Mission Support System (SMSS). The following sections provide a brief overview of these programs.

The Mission
For some applications and missions, it is cost effective and reasonable to employ an “autonomy appliqué” on an otherwise conventional manned vehicle, such as a truck. Military convoys are a prime candidate for application of an autonomy appliqué because (1) even limited autonomy will reduce accidents caused by driver fatigue, inattention, and some road conditions; (2) autonomy can free up the driver/crew to obtain greater situational awareness and security, enhancing their survivability; and (3) autonomy may permit the Army to reassign some drivers to other roles, supporting net force count reduction and cost savings. But even with automation of the basic driving function, there is good reason, at least for the near term, for maintaining the “mannability” of these vehicles to drive them in congested areas, such as ports, and to enable many functions that robotics are not currently employed to do.

The Program
The AMAS program is jointly funded by several Department of Defense (DoD) agencies and Lockheed Martin and is aimed at solving the autonomous convoy problem. AMAS physically consists of two main elements: a Drive-By-Wire/Active Safety Kit and an Autonomy Kit. The Autonomy Kit is composed entirely of components and software that would be common to any logistics convoy vehicle, including sensors, computers, and the controlling software. The Drive-By-Wire/Active Safety Kit includes some vehicle-independent components but also all of the vehicle-specific parts necessary to interface to specific vehicle steering, throttle, transmission, and brakes.

Under the AMAS program, developers initially addressed driver-warning and driver-assist functions, such as collision, rollover, and blind-spot warning. Additionally, the program has focused on stability control, lane-keeping, and the ability to execute convoy operations in a semi-autonomous leader/follower mode, including related functions, such as remote control, teleoperation, and waypoint navigation.

Recent Progress
The AMAS completed design, fabrication, and installation of Autonomy and Active Safety/Drive By Wire Kits early in 2014 and entered into a series of Technology Demonstrations, Safety Tests, and Operational Demonstrations, which were completed in August 2014. Those tests demonstrated the abilities of the Driver Warning/Driver Assist functions to deal with real-world convoy problems, such as traffic and weather. Performance of the system was excellent.

In addition, under an adjunct to the AMAS program, Capability Advancement Demonstrations of a fully autonomous convoy operation featuring an autonomous leader and followers were conducted. As shown in Figures 1 and 2, the capability was demonstrated in simulated on-road and urban environments with simple obstacles, such as pedestrians; oncoming, passing, and crossing traffic; unplanned route interruptions demanding autonomous real-time route replanning; go-to-point navigation; traffic circles; and stop sign intersections. 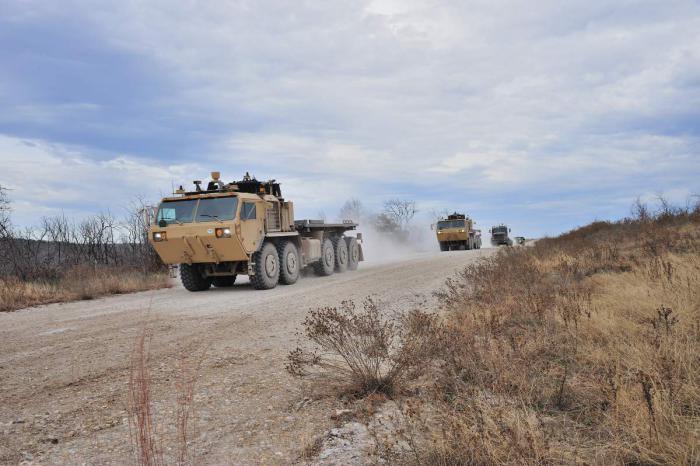 Future Plans
The aforementioned demonstrations have convinced potential users that the area of ground robotics has reached sufficient maturity that it can be considered for manufacturing development and fielding in the short to medium term (i.e., within 5 years). There are a number of programs that could possibly deploy elements of AMAS onto heavy logistics trucks in the near future. At present, the AMAS program is now entering a year of maturation in which software will be added to address additional functionality requested by the users or deemed desirable to address performance gaps.

The Mission
For some applications and missions, rather than add an autonomy appliqué to an existing vehicle, there is good reason to use a “mobility platform” that is optimized as a robotic vehicle. The reality is that so long as an unmanned vehicle design also has the requirement to be human-drivable, that vehicle design is forever burdened with concessions to the human form (such as seats and steering wheel and space for the human) that reduce its available payload for “mission equipment.”

In selecting or designing a mobility platform for an off-road autonomous UGV application or for a family of off-road autonomous UGVs, the design must address a central issue: with no human nearby and the vehicle possibly far from recovery or repair capabilities, the UGV must possess extraordinary mobility, power, robustness, and reliability. To obtain those qualities, one must usually trade away the space and weight that would otherwise be reserved for the human. If that trade isn’t made, the design is stuck with double the burden.

Additionally, the UGV must be highly mobile and able to move in soft soils, mud, and water because there is no human to direct the vehicle from one subtly difficult path to a slightly less unpleasant path. And if the vehicle gets stuck, there may be no humans around to free it. The vehicle must also be powerful enough to forge through difficult environments that might slow or stop a human and to get the payload through to its objective. Should a potential mobility platform not have adequate performance, it could be lost and become a source of supply for the enemy. The mobility platform must also be robust and reliable because there may be no human to repair it if it becomes damaged or disabled. And because off-road driving algorithms are still developing, a UGV is more likely to become hung up on a stump, rock, or other obstacle than a human-driven vehicle.

The Program
With these thoughts in mind, an independent research and development (IR&D) program was executed to develop a UGV mobility platform optimized as a robot, while also seeking high versatility, which is a requirement for any new platform. In addition, because the objective was to develop a mobility platform to support “small unit” military operations (platoons and squads), or their civilian counterparts (fire department or police units), developers quickly vectored toward a payload requirement of approximately 1 ton. Combining all those requirements quickly led to the design of the SMSS platform. The SMSS is a six-wheeled, skid-steered platform with a 45-HP diesel engine powering a hydraulic drive system. The platform uses the same basic Autonomy Kit that is used on AMAS. Over the last 7 years of development, the Autonomy Kits of the SMSS and AMAS (and its predecessor, the Convoy Active Safety Technology [CAST] project) have leveraged the progress of each other, with each one leaping ahead of the other for its own needs on an almost annual basis. At this time, the software and hardware bases for the Autonomy Kits on AMAS and SMSS have been completely aligned, and they are now running software from the same library.

SMSS has been used in a number of demonstrations and experiments over the last few years, culminating in a deployment to Afghanistan in 2012. While the SMSS was not used in a fully autonomous mode in that deployment, it was used as a highly mobile and powerful logistics transport, essentially a radio-controlled pickup truck. And the results were obvious. Soldiers reported that every pound of sandbags or concertina wire carried by SMSS during that deployment would have otherwise been carried by hand, potentially resulting in numerous injuries to personnel.

Recent Progress
Most recently, a fully autonomous reconnaissance, surveillance, and target acquisition demonstration was conducted using SMSS, a K-MAX unmanned helicopter, and a Gyrocam optical sensor in Fort Benning, GA. The K-MAX rotorcraft was selected for this application because, in 2011, it became the first unmanned aircraft system to deliver cargo in theater for the U.S. Marine Corps. As troops were frequent targets of improvised explosive devices (IEDs) and insurgent attacks, the K-MAX helped to reduce the number of truck resupply convoys and their troop escorts, thereby reducing the risk to combat personnel.

During the demonstration, K-MAX delivered SMSS by sling load to conduct an autonomous resupply mission scenario for soldiers defending a village. At mission completion, SMSS proceeded to an observation point, where the system raised its Gyrocam sensor and began scanning the area for enemy forces. In an actual mission, upon observation of enemy forces, the remote operator would notify the commander on the ground, who would assess the threat and determine the appropriate method of neutralizing that threat.

Future Plans
The U.S. Army is now planning a series of experiments for Early Entry and related missions in which robotics could play a decisive role, and developers anticipate that SMSS may become a part of that exercise. This exercise, as well as other experiments and demonstrations planned through 2016, will be used to inform requirements and the programmatic path forward for an Engineering & Manufacturing Development (EMD) program to start in the next 3 to 5 years. That EMD program will be aimed at filling a number of roles for small unit operations.