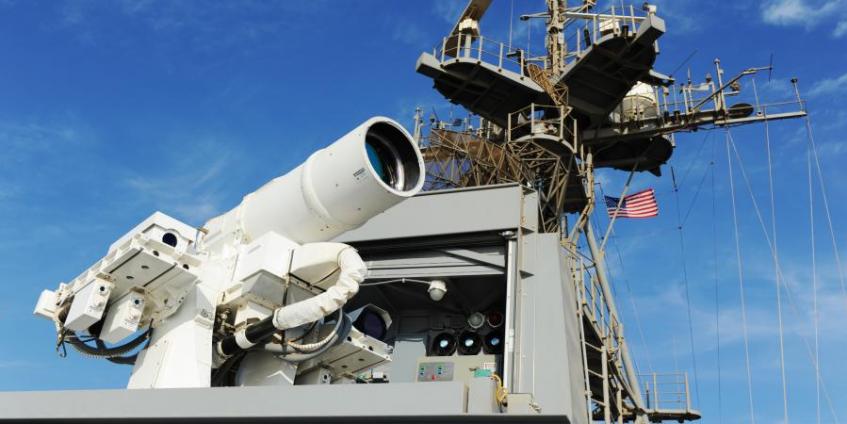 For many years, antiship missiles have represented an ongoing threat to U.S. military operators, as well as a challenge to U.S. defense planners and technology developers. In 1987, during the Iran-Iraq War, the frigate USS Stark was hit and severely damaged by two antiship Exocet missiles (as shown in Figure 1). These missiles were also the cause of the 1982 sinking of the British guided missile destroyer HMS Sheffield.

To address this issue, multiple kinetic missiles have traditionally been employed to defeat antiship missiles, such as in the 2016 engagement of two cruise missiles by the destroyer USS Mason, which used two Standard missiles and an Evolved Seasparrow Missile (ESSM). However, directed energy weapons (DEWs), such as high-energy lasers (HELs), offer the military a new and improved opportunity to defend against antiship missiles, potentially reducing the cost and timeline of an engagement and providing an increased ability to engage multiple target sets.

But DEWs come at a cost—power. These weapons require increased power, energy, and thermal management systems on platforms to address current and future threats. DEW developers must thus work to account for increased power levels and storage, which are dependent on many factors, such as the distance to the target, materials of the target, and the power generation capability of the platform engaging the target. In short, the challenge is to maximize the effectiveness of DEWs while minimizing the power impact to the host platform.

It would not be advantageous to have DEWs that require all the power of a platform, leaving little or no power for other system needs. Careful platform integration is required to ensure on-demand power for warfare system propulsion and platform services while employing DEWs. As illustrated in Figure 2, DEWs such as lasers are highly inefficient in converting energy from either electrical, chemical, or optical to energy for light amplified stimulated applications. Therefore, the platforms in which DEWs are integrated need to provide increased input power and storage. Several DEW demonstrations have been produced but were not fully integrated into platforms due to power-related challenges. However, if the U.S. military is going to use energy as a weapon, it better have plenty of it.

PAST AND EXISTING DIRECTED ENERGY SYSTEMS

Historically, military lasers capable of generating the higher laser power necessary to defeat hard targets have been explored and developed. Initially, the Department of Defense (DoD) invested in chemical and gas lasers in the 1980s and ’90s. This investment resulted in the development and scale-up of the largest chemical laser testbed, the Mid-Infrared Advanced Chemical Laser (MIRACL)/Sea Lite Beam Director (SLBD) testbed. The U.S. Navy gained valuable information from testing the laser against missiles and other targets. This information concerned target lethality and how to control the laser beam in the atmosphere. As a result, programs such as the Airborne Tactical Laser (ATL), Airborne Laser (ABL), Space Based Laser (SBL), and Tactical High Energy Laser (THEL) were initiated. The limitations of these lasers, however, were that they used large quantities of toxic chemicals as a power source, which limited their magazines and created huge reloading and safety and handling issues. The DoD thus began to explore electric lasers as an alternative to chemical lasers.

One type of electric laser, the free electron laser (FEL), produces high-quality, low-energy electrons that are accelerated to almost the speed of light. These energized electrons emit light as coherent radiation at HEL powers. Figure 3 shows a simplified diagram of an FEL system with a linear accelerating cavity structure and permanent magnet wiggler for light extraction. The figure also shows optional optical cavity mirrors, which make the FEL an oscillator if installed. If the mirrors are removed, then the FEL is configured as an amplifier. FELs have no chemicals and have an unlimited magazine as long as electrical power is applied to it. Unfortunately, FELs also require a lot of source power to operate at HEL levels.

Another type of electric laser suitable for DoD applications is a solid-state laser (SSL). Currently, fiber lasers and slab lasers are the primary options of SSLs being explored for HEL systems. Both types require a gain medium, a pumping mechanism, a feedback mechanism, and output couplers. SSLs are typically at fixed wavelengths and are adaptable to ship, air, and ground platforms due to their size and weight for low-power engagements. In addition, SSLs offer near-continuous target engagement but are limited by removal of waste heat energy from the gain material.

If the U.S. military is going to use energy as a weapon, it better have plenty of it.

Electric-gas lasers have also been explored by the DoD. One example is the airborne CO2 laser invented by the Air Force. Other types of gas lasers include diode pump alkali lasers, which have the potential to achieve high power. They are desirable because of their optical-to-optical conversion efficiency.

So, where are we in our quest to achieve high-power lasers? Low-power fiber lasers have been tested and demonstrated by the Navy, Army, and Air Force. The Navy system uses incoherent beam combined fiber lasers and has been tested against short-range, in-port, littoral, and blue water threats. The Army is also working on SSL systems to defend bases in the field. The Ground-Based Air Defense (GBAD) system is a Marine Corps concept of a laser weapon system that consists of a vehicle-mounted HEL; command, control, and communications; and volumetric surveillance radar that would be capable of shooting down threats. GBAD will demonstrate the capability of a rugged expeditionary HEL system that can be cued by a radar capable of detecting low-radar-cross-section (RCS) threats. It will be able to perform hard kills of asymmetric threats to prevent reconnaissance surveillance and targeting and acquisition of expeditionary forces.

Current prototype laser weapon systems and projected future systems require increasing levels of electrical power to generate the laser energy needed to defeat threats. Requirements for power range from low-power levels, needed for situational awareness and disrupt/ defeat of short-range asymmetric threats, to high-power levels, needed for harder targets. As the power and range of laser technologies increase, so do the challenges to maintain input power, thermal management, and integration related to size and weight.

Power scale-up challenges are caused by low-efficiency, thermal management, and control issues. High input power, such as with megawatt-class lasers, requires tens of megawatts of input power to be provided by a platform in extremely short engagement timeframes. To accommodate the power demands of other platform subsystems, high-energy-density power storage solutions need to be explored. The increased power will cause thermal management issues in the laser diodes, optics, and couplers, as well as controls and switches. The power controllers and switches needed depend on the kill chain timeline, which determines duty-cycle requirements, transients, turn-on times, and load levelling. Current sea platforms have the ability to produce electrical power using different types of generators. Air and ground platforms rely on power pods and auxiliary generators while shore-based systems rely on grid or base power systems. Table 1 shows the power sources, current, and potential power for DEWs based on their application. For air, sea, and ground systems, power generation, platform integration, and thermal management are key issues. 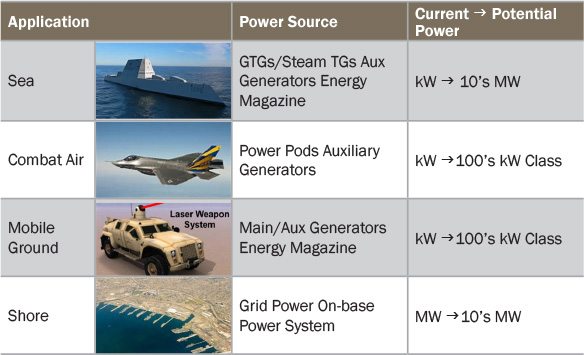 Power for DEWs is also required for laser diode cooling and power conditioning, as well as illuminating, pointing, and tracking systems. The challenge is providing the power without impacting platform performance during HEL engagements.

The Navy has conducted studies through the Naval Postgraduate School [1–3] on energy storage options to address a notional ship firing multiple HEL shots without taxing the ship’s electrical system. Several laser power levels were investigated on existing naval vessels. Energy storage options considered were batteries, capacitors, and flywheels. The study compared how quickly the stored energy can be used, the amount of energy stored for a given size and weight (energy density), size, weight, discharge, and recharge rate. The study concluded that a hybrid system comprising a generator, flywheel, and batteries was the preferred choice. Although current capacitors have extremely fast discharge and recharge rates, they were not selected because they do not have sufficient energy densities and are too large and heavy. There are numerous other storage solutions also being investigated for platforms, with some of these solutions having better energy storage capacities and being more compact.

A comparison of platform-type power requirements shows that power and thermal integration risks increase with increasing power and reduced platform size. Projecting heat off of the laser, through the platform, and into the environment at the requisite distribution and rejection rates is a challenge. Thermal acquisition challenges are constrained by proprietary capabilities and compounded by a lack of common interfaces for thermal subsystems. SSLs using laser diode pumps require specialized cooling technologies, which are currently limited to lower-power handling capability. The design of thermal management and transport systems needs to accommodate growth in system requirements for megawatt-class weapon and sensor systems such as distribution voltage increases.

The Office of Naval Research is conducting basic and advanced research to address many of the power-related challenges that DEWs face. The following list briefly states the various areas in which research is ongoing. Figure 4 depicts the research areas for various types of platforms in power generation, energy storage, and distribution and control.

Future and emergent research areas include:

DEWs will provide future platforms with the capability to protect themselves against current and future advanced, maneuvering, high-speed threats. Development of DEWs that will defend future forces against attacks by current and future high-speed maneuvering missiles, unmanned aerial vehicles, and small boats is underway. However, significant research and development are still needed to ensure adequate power, energy, and thermal management is available for future DEWs. Namely, power control systems must be developed to handle the relatively high powers necessary for DEWs without affecting platform operations during a directed energy engagement. In addition, more research is needed on how to successfully integrate power, energy, and thermal management technologies into new and existing platforms, thus enabling the full capability of DEWs for the nation’s defense.

The author thanks Mr. Quentin Saulter from the Office of Naval Research (ONR) for his insights on the subject matter and for his review of and comments on this article.