Over the last 60 years, sea mines (such as those pictured in Figure 1) have reportedly been responsible for damaging or sinking four times more U.S. Navy ships than any other weapon system [1]. Furthermore, next-generation mines, in addition to becoming more readily available, are increasingly sophisticated and difficult to find. Such mines can actually pinpoint the size and shape of a ship moving in water; they can be fitted with acoustic, magnetic, seismic, and pressure sensors to detect a ship’s approach; and they can determine the most effective time to detonate. In spite of these capabilities, few people outside the mine-countermine community seem to be discussing the threat posed by advanced sea mines. The subject tends to fall beneath the discussions regarding missiles, torpedoes, and other high-tech weapons—at least until a mine goes off.

However, such discussions may be changing. Ongoing sonar research being performed in part by the Georgia Tech Research Institute (GTRI) is promising to improve the Navy’s ability to find sea mines deep under water. The underlying technology for this research—known as synthetic aperture sonar (SAS)— uses advanced computing and signal processing to create fine-resolution images of the sea floor based on reflected sound waves.

Synthetic aperture technology originated in the radar community in the mid-20th century and was adapted by the sonar community approximately 20 years later. For many years, SAS was not practical for underwater use due to limitations associated with enabling technologies. As these technologies have advanced, researchers are reexamining the fielding of SAS systems for a wide range of commercial and military applications, especially mine detection.

Thanks to the long-term vision and a series of focused efforts funded by the Office of Naval Research (ONR) that date back to the 1970s, SAS is becoming an increasingly robust technology. And when it transitions to the fleet, the technology is expected to dramatically improve “the Navy’s ability to carry out the mine-countermeasure mission.

“The Navy wants to find sea mines,” said Daniel Cook, a GTRI senior research engineer. “There are systems that do this now, but compared to SAS, the existing technology is crude.”

The ONR-funded SAS research is being conducted in collaboration with the Applied Research Laboratory at The Pennsylvania State University. Researchers are making strides in improving the ability to predict and understand sonar image quality and are publishing and presenting results of their work at numerous conferences.

Sonar systems emit sound waves and collect data on the echoes to gather information on underwater objects. The Navy uses torpedo-shaped autonomous underwater vehicles (AUVs) (such as the AUV pictured in Figure 2) to map swaths of the sea floor with sonar sensors. One of the most well-known AUVs is the Bluefin 21, which was recently used to search for Malaysia Airlines Flight 370 after it disappeared in March 2014. AUVs zigzag back and forth in a “lawn-mowing” pattern and can map at a range of depths from 100 m to 6,000 m.

SAS is a form of side-scanning radar, which sends pings to the port and starboard sides of the AUV and records the echoes. After canvassing the entire area, data collected by the sensor are processed into a mosaic that provides a complete picture of that area of the sea floor to detect underwater objects, such as the WWII airplane pictured in Figure 3. SAS has better resolution than real aperture sonar (RAS), which is currently the most widespread form of side-scan sonar in use. RAS transmits pings, receives echoes, and then generates a corresponding strip of pixels on a computer screen. The sonar then repeats this pattern until it has an image of the sea floor. This technology is readily available and relatively inexpensive, but its resolution over long ranges is insufficient to suit the Navy’s mine-hunting needs. 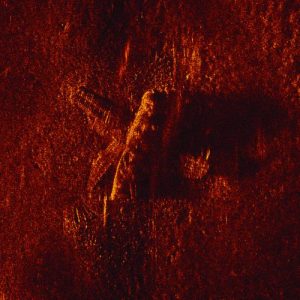 Additionally, RAS sensors emit relatively high acoustic frequencies that are quickly absorbed by the seawater. SAS uses lower-frequency acoustics that can travel farther underwater, thus increasing the range at which fine-resolution pictures can be produced.

Unlike RAS, SAS does not create a line-by-line picture of the sea floor. Instead, SAS repeatedly pings while recording the echoes on a hard drive for post-processing. After an AUV surfaces, the hard drive is removed and data are analyzed by computers in a complex signal processing effort. The processing converts the pings into a large, fine-resolution image of the sea floor. The commonly accepted measure for fine resolution is a 1-inch by 1-inch pixel size, which can be achieved by SAS.

CONTRAST PREDICTION: A GAME OF SHADOWS

Tests of SAS in AUVs have produced fine-resolution images of sunken ships, aircraft, and pipelines. However, when looking at an image of the sea floor from above, operators sometimes have difficulty discerning the identity of simple objects. For example, certain mines have a circular cross section. When looking at a top-down image, an operator might not be able to tell the difference between a mine and a discarded tire. So, to discern if a circular-shaped object is a threat, operators also often consider the shadow that an object casts in the sonar image. Shadows cast by mines are often easy to distinguish from ones cast by clutter objects, such as tires. Accordingly, shadow contrast research is also used to help ensure that this distinction is as clear as possible.

“Predicting contrast has been a challenging problem for the sonar community,” Mr. Cook said. “We developed a compact model that allows us to compute contrast very quickly.”

Improving contrast prediction promises to have a ripple effect in mine-hunting capability. Naval officers will be better able to plan missions by predicting how good the shadows will be in certain environments, which can lead to improved imagery, power conservation, and better performance for automatic target recognition software.

“Mines are a terrible problem,” said Mr. Cook. “They lie in wait on the sea floor, so you want to go find them with as few people in the process as possible—which is why we’re driven toward these autonomous vehicles with synthetic aperture sonar.”

The United States plans to replace its fleet of minesweepers over the next 12 years with multi-function vehicles outfitted with the latest mine-countermeasure capabilities. The ONR’s Commercial Technology Transition Office has made possible the transition of SAS into the Long- Term Mine Reconnaissance System (LMRS), an unmanned undersea vehicle that will enable submarines to extend their mine reconnaissance reach. It is hoped that efforts such as this, along with continuing research in the SAS arena, will go a long way toward advancing the community’s ability to detect and defeat the silent underwater threat of sea mines.

[1] Rabiroff, Jon. “US Military Enters New Generation of Sea Mine Warfare.” Stars and Stripes, May 2011.