Two Arms are Better Than One: The Benefits of a Dual-Arm Robotic System 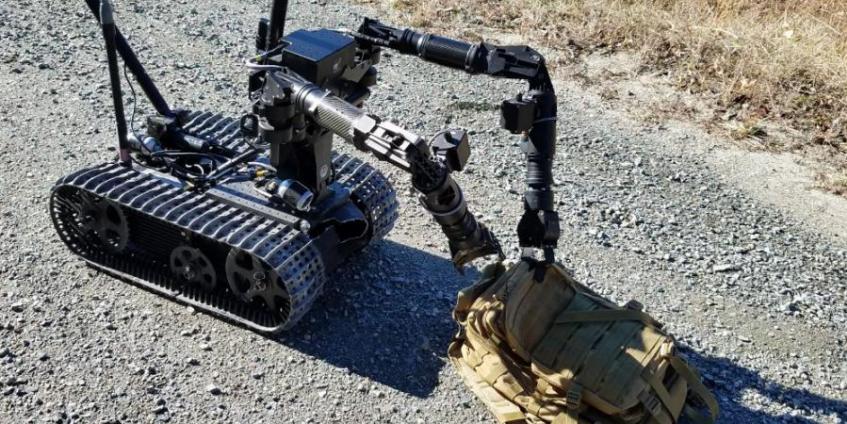 Already one of the most dangerous jobs in the military, the role of explosive ordnance technician has become even riskier in recent years due to a marker increase in the use of improvised explosive devices (IEDs) in theater.  The military has long relied on the use of unmanned vehicles (including ones with robotic arms) to alleviate some of these risks, but ongoing advances in dual-arm robotic technology are offering significant advantages over single-arm applications for the way military operators inspect, detect, and dispose of IED threats.  In addition, military planners and developers continue to consider dual-arm technologies for other applications and missions that call for human-like dexterity and control.

THE EVOLUTION OF ROBOTIC ARMS

Historically, unmanned ground vehicles (UGVs) and unmanned aerial vehicles (UAVs) have provided military personnel with basic reconnaissance and surveillance capabilities. In fact, as far back as the 19th century, Thomas Edison and Nikola Tesla were espousing the benefits of using robots on the battlefield via experiments with radio-controlled devices [1].

In the 1960s, UGVs began to be tested to help with basic navigation and exploration tasks on the battlefield [2]. These early units could motor through and over rough terrain, deliver payloads, and capture still images. As time progressed, robotic platform capabilities continued to grow to include a variety of sensing capabilities, including video, audio, and heat-sensing technologies. While these fundamental capabilities provided a certain degree of risk reduction, the completion of dangerous tasks, such as the actual dismantling and disposal of an IED, still required the dexterity of human hands.

The effectiveness of unmanned vehicles was further enhanced by the eventual incorporation and use of single robotic arms. With the addition of manipulator arms, mobile platforms now had the capability to interact with and manipulate their surroundings: they could pick up explosives or other hazards and even neutralize such objects via teleoperated control. Despite these capabilities and advantages in certain circumstances, however, single-arm robotic systems have remained limited in their dexterity, reach, and lifting capacity. For instance, if an explosive ordnance disposal (EOD) team encounters an IED inside a bag, a single-arm robot would need to use force to open the bag and explore its contents. This action could damage or destroy the evidence and/or endanger lives.

Single-arm robotic systems have remained limited in their dexterity, reach, and lifting capacity.

Accordingly, dual-arm robots can greatly improve a mission’s effectiveness by providing users with more human-like control over their environments. The direct benefit of such technology to military personnel is significantly increased performance and capability over currently fielded manipulators for both teleoperated and semi-autonomous use on mobile robot platforms.

With dual-arm robotic systems, the dexterous manipulation and precision placement of objects are possible, as the robot essentially serves as an extension of the human controlling it. Should the dual-arm robot encounter an IED inside of a locked container, for example, the robot would be able to use both end effectors to open the lock and gently remove its contents without damaging any of the items, making accidental detonation less likely.

A dual-arm robotic manipulation system provides the capability to stabilize an object with one arm while allowing the other arm to manipulate the object. According to Hau Do, Robotics Team Lead, EOD Technology Division, at
the U.S. Army’s Armament Research, Development and Engineering Center at Picatinny Arsenal, NJ, this capability would help with tasks that are particularly challenging and time-consuming for one-arm systems, such as unscrewing bottle caps, opening packages, unzipping backpacks, and pulling items apart.

Additionally, technicians conducting EOD missions typically wear blast suits that weigh nearly 100 lbs. These suits are difficult to move in and may even induce heat stress. Thus, a dual-arm robotic system that can mimic the movements of a robot operator can reduce these concerns by allowing Warfighters to execute dangerous missions and neutralize threats from a safe distance, while preserving the evidence.

Note that dual-arm robots are ultimately only as useful as their control devices. As robotic systems grow more complex, so does the need for a controller that can keep pace with ever-evolving technology. Traditionally, manipulator arms are controlled using modified versions of today’s most popular gaming-system controllers, which are relatively limited in their use [3]. Recognizing this limitation, RE2 Robotics researched a new control device, called the Imitative Controller, which allows users to move a scaled model of the robot’s manipulators.

Traditional methods that control each joint of a manipulator independently, such as dial and switch controllers or gaming controllers, are not practical for effectively and efficiently controlling highly dexterous manipulators. Furthermore, once a second arm is added, traditional control methods become obsolete.

Essentially a high-tech “puppet master,” Imitative Controller technology provides highly intuitive command of dual-arm manipulation systems. The joints contain encoders that determine the position and orientation of the device [3]. This technology, which features one-to-one-mapping and optionally haptic feedback, has been shown to be the most useful feedback type when manipulating objects because it provides the user with immediate sensory feedback and physical confirmation of the robot’s specific positions and orientations [3]. In addition, the controller gives users specific control over all of the robot’s joints, and the curved-handle design reduces cognitive and physical fatigue.

And when it comes to controlling a two-arm system, the value of intuitiveness cannot be underestimated. Intuitiveness is measured in two ways: (1) training time, and (2) time to proficiency.  Numerous demonstrations and training exercises have shown that an operator of the Imitative Controller can become proficient at controlling a highly dexter-ous two-arm system with as little as 1 minute of training. Likewise, time to  proficiency is typically achieved within 1 hour.

The military’s ultimate goal for this technology is to improve the manipulation capabilities of existing EOD robots. A proponent of the Army’s Interoperability Profiles (IOP), RE2 Robotics has integrated its dual-arm robotic system onto a variety of third-party platforms, proving interoperability and extending the usefulness of legacy systems. Interoperability among platforms is essential during active engagements, as a system’s ability to be rapidly configured through hot-swappable payloads can reduce the time it takes to perform missions.

Dual-arm robots can also be used for various non-EOD defense mission areas, such as combat engineering and infantry. This technology can significantly enhance performance and capability over currently fielded manipulators for both teleoperated and semi-autonomous use on mobile robot platforms. These manipulation improvements directly correlate to a reduction in time-on-target and overall mission time, resulting in increased safety for all mission personnel.

Dual-arm robotic technology also adds flexibility and maneuverability to industrial settings. For instance, companies such as Kawasaki and ABB Robotics have designed dual-arm collaborative robots that assist with the fine assembly of small parts—applications that would be virtually impossible to conduct with a single-arm robot. Moreover, there is potential for dual-arm robotic systems to be used in commercial industries that require remote operation for dangerous tasks, such as hazardous materials handling  or offshore and surface oil and gas inspection.

In conclusion, ongoing innovation and advancements in manipulation technologies and intuitive control are expected to help meet the ever-changing demands of the military, enabling users to successfully perform a variety of dangerous missions from safe distances. And any mission—whether military or not—that requires human-like dexterity and control is a potential recipient for the significant benefits that dual-arm robotic technologies increasingly offer.