BRAWLER simulates air-to-air combat between multiple flights of aircraft in both the visual and beyond-visual-range (BVR) arenas. This simulation of flight-vs.-flight air combat is considered to render realistic behaviors for military trained fighter pilots. BRAWLER incorporates value-driven and information-oriented principles in its structure to provide a Monte Carlo, event-driven simulation of air combat between multiple flights of aircraft with real-world stochastic features. The user decides the pilot’s decision process, including doctrine, mission-specific objectives, and tactics; level or training and experience; and perceived capability of the enemy. 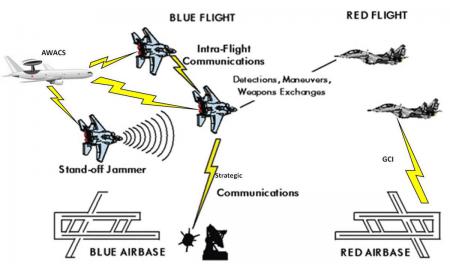 BRAWLER inputs consist of component-level system capabilities, which include aircraft performance, weapons performance, and sensor systems performance. The simulated scenario consists of number and types of aircraft, their command and control hierarchy, their disposition and bases, as well as GCI, AWACS, SAM Sites, SSMs, and SOJ support. Additionally, the set of rules representing doctrine and mission-specific tactics for both sides and all missions represented in the scenario must be specified. BRAWLER’s current default configuration is capable of handling a total of 20 different aircraft in as many as 10 independent flights with up to eight aircraft per flight, but can be run with well over 20 aircraft. Not surprisingly, setting up a study takes considerable time to simulate realistic combat, especially if it requires matching known tactics, techniques, and procedures (TTP).

BRAWLER output consists of several files. The first is a log of the scenario, which includes major events, such as detections, weapons firings, and kills. The second file is an output file that reflects the input data read and provides more detailed information about the activities that took place. User-controlled switches control the detail and kind of information. The third file is a binary history file, which is processed by BRAWLER support programs to provide graphics output (to include output files allowing BRAWLER engagements to be visualized in SIMDIS) and detailed track information. Another file provides BRAWLER with a checkpoint/restart capability, which can be used to salvage catastrophic failures to fine tune a flight as well as assist in debugging. Detailed aircraft and missile trajectory files for each aircraft and missile in the simulation may also be output.

The BRAWLER Software Package consists of two (2) DVDs. One DVD is unclassified and contains the BRAWLER Version 8.7 application source code and documentation. The other DVD is classified SECRET//NOFORN and contains intelligence data.

DISTRIBUTION STATEMENT C.Distribution authorized to U.S. Government agencies and their contractors, CRITICAL TECHNOLOGY, 8 March 2018. Other requests for this document shall be referred to Dale Johnson, HQ US Air Force/A9FM, 1570 AF Pentagon, Washington, D.C. 20330-1570.

WARNING− This media contains technical data whose export is restricted by the Arms Export Control Act (Title 22, U.S.C., Sec 2751, et seq.) or the Export Administration Act of 1979 (Title 50, U.S.C., App. 2401 et seq), as amended. Violations of these export laws are subject to severe criminal penalties. Disseminate in accordance with provisions of DoD Directive 5230.25.

Requests from non-U.S. Agencies must be forwarded to their country’s U.S. embassy.