Flare Aerodynamic Modeling Environment (FLAME) – FLAME is a user-friendly software tool that allows users to specify an aircraft, configure the location and orientation of its expendable decoy dispensers, and define flare patterns for dispense.  FLAME uses a combination of 3 degree-of-freedom (3 DOF) and 5 DOF equations of motion to calculate trajectories of each expendable decoy specified in the flare pattern.

FLAME has models for all in-service infrared decoys used by the Army, Navy, and Air Force, as well as many developmental items.  All current types of expendable decoys are modeled, including pyrotechnic, pyrophoric, and aerodynamic/thrusted.  Output can be in tabular format for use in missile flyout simulations as well as 2D and 3D plots, or a 3D rendered animated movie of the flare dispense that can be paused and rotated in 3D for analysis. 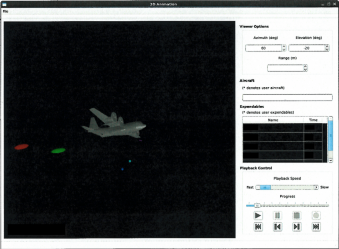 One superb feature of FLAME is that all of the flare and aircraft input files are nicely commented ASCII text files.  The program reads the file names in the aircraft directory and flare directory at start-up to populate the GUI menus.  If a user wants to add his/her own data to FLAME, all they need to do is copy one of the existing files as a template, rename it, and modify it to suit their needs.  The next time FLAME is ran, the user’s new file comes up in the menu along with the data files supplied with FLAME.

This is a very powerful feature and allows users to tailor the tool to their own needs without having to continually come back to us for support.

FLAME has been awarded a patent by U.S. Patent Office (8,423,336, awarded April 16, 2013).  The underlying FLAME aerodynamic code has also been integrated into MOSAIC, GTSIMS, and ISAMS, which are the most widely used missile engagement modeling tools in the DoD.

The original author of both FLAME and the TFD is John Bennett; both tools were originally written in Borland C++ Builder using object oriented programming in C++.  Recent FLAME 2.0 and TFD 2.0 upgrades were done by Johnny Hung using Qt, which is a cross-platform application framework.  The new versions will run under both Windows and Linux operating systems.

Additionally, both FLAME and the TFD will be put in the Defense Systems Information Analysis Center (DSIAC) for future distribution.  FLAME has been upgraded to include 3D aerodynamic flow fields near the aircraft that have been generated with computational fluid dynamics (CFD) codes.

FLAME and the TFD have been distributed to over 75 users across DoD and industry.  They are the DoD standards for expendable IR decoy trajectories and intensity data.  FLAME and the TFD are used by virtually all the DoD labs and contractors doing IRCM effectiveness modeling.

FLAME and TFD distribution is SECRET/NOFORN.

WARNING− This media contains technical data whose export is restricted by the Arms Export Control Act (Title 22, U.S.C., Sec 2751, et seq.) or the Export Administration Act of 1979 (Title 50, U.S.C., App. 2401 et seq), as amended. Violations of these export laws are subject to severe criminal penalties. Disseminate in accordance with provisions of DoD Directive 5230.25.

Requests from non-U.S. Agencies must be forwarded to their country’s U.S. embassy.

If you are experiencing a problem with this button, please try clearing your cache.
If it is still not working, please use the Contact Us button and choose Model Request.