The Vulnerability Toolkit, or VTK, is a suite of software tools that supports the performance of ballistic vulnerability and lethality studies involving military systems. The primary purpose for the toolkit is to provide a “one-stop-shop” for ballistic vulnerability & lethality analysis, by providing analysts with the necessary tools required to perform pre-test predictions, concept evaluations, trade studies, and requirements verification studies. The primary objective of the software application provided with the toolkit is to help the analyst determine the probability of kill (Pk) for a system of interest given a particular ballistic threat impact.

The VTK can support analyses for a range of systems and a range of ballistic threats. Primarily, the toolkit supports analyses of Air Force and Navy fixed- and rotary-wing aircraft, but it has also supported assessments of ground systems, small boats, and even orbital vehicles. Regarding threats, the software applications in the toolkit can model projectiles (e.g., ball rounds, armor-piercing rounds, armor-piercing incendiary rounds, high explosive rounds, etc.), missile fragments, shaped-charge jets, and missiles. The software applications included in the toolkit were selected to handle threat analyses using a variety of methodologies.

The primary software application in the VTK is the Computation of Vulnerable Area Tool (COVART); however, the toolkit also includes a number of other tools that are useful for conducting vulnerability & lethality studies. Multiple elements of the Department of Defense community, including the Air Force Life Cycle Management Center (AFLCMC), Naval Surface Warfare Center (NSWC), and the Army Research Laboratory (ARL), are responsible for the development and maintenance of the software applications included with the toolkit.

The figure below illustrates the hierarchal organization of the application contained in the VTK. 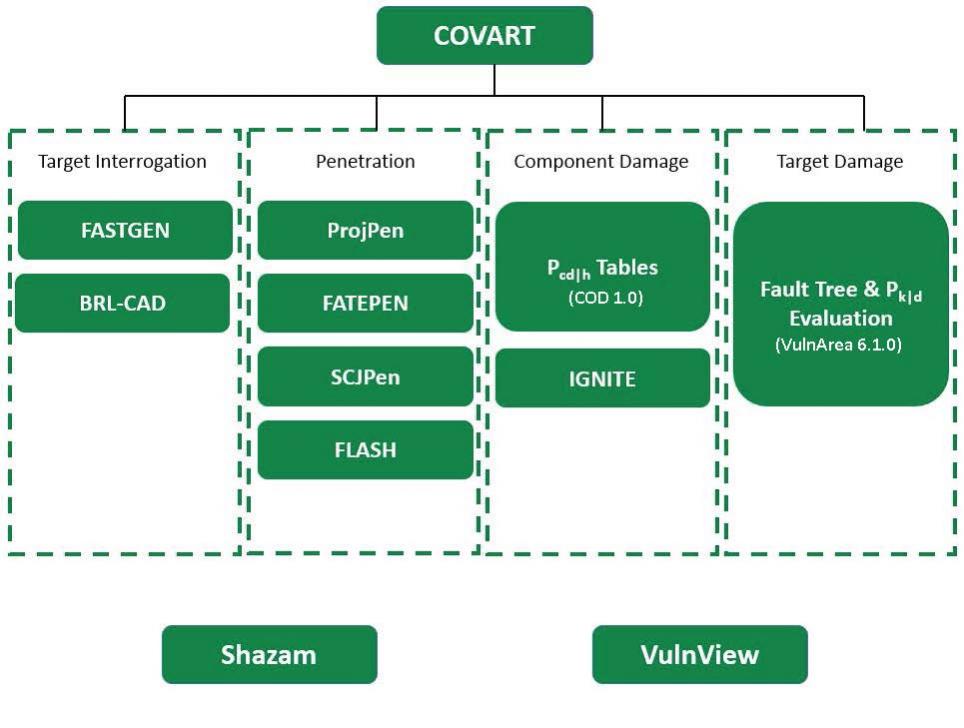 The following is a list of the major software tools included:

Apart from these larger software applications, the VTK also provides utilities that help users to develop and check inputs as well as analyze and visualize outputs. The software applications provided by the toolkit may change from release to release, depending on the development of additional capabilities and the evolving needs of the vulnerability/lethality community.

The primary applications provided with the VTK are further described below.

COVART predicts the ballistic vulnerability of vehicles (fixed-wing, rotary-wing, and ground targets), given the ballistic penetrator is evaluated along each shotline (line-of-sight path through the target). Whenever a critical component is struck by the penetrator, the probability that the component is defeated is computed with user-defined conditional probability of component dysfunction given given a hit (Pcd/h) data. COVART evaluates the vulnerable areas of components, sets of components, systems, and the total vehicle.  Stated simply, the the vulnerable area is the product of the presented area of the component and the Pcd/h data. The total target vulnerable area is determined from the combined component vulnerable areas based upon various target damage definitions.

COVART is capable of modeling the damage mechanisms induced by threats using several methods. The analyst’s selection of the damage mechanism modeling method is dependent upon the threat type and failure modes of the equipment being modeled, and a given component may be vulnerable to several damage effects. Damage criteria used for Pcd/h functions include hole size, damage distance, airgap distance, and impactor mass and velocity. The model is capable of assessing the effect of component and system redundancy through the use of failure analysis trees (fault trees) and multiple vulnerable (MV) systems.

The estimation of ballistic damage to military systems has long been an objective for military analysts. Determining how ballistic threats affect system functioning is important to the defense community, whether it is to determine a system’s compliance with vulnerability specifications, support testing activities, or assess a system’s vulnerability performance. FASTGEN supports in the assessment of ballistic vulnerability. It identifies the ballistic threats that may impact in attacks against a system of interest.

FASTGEN utilizes ray tracing to identify the portions of a system potentially impacted by ballistic threats. This methodology involves projecting rays, representing threat trajectories, through a user-defined geometry description of the system of interest. FASTGEN calculates the points of intersection between the rays and geometry and transforms this data into shotlines, which are sequential lists of system components possibly encountered along the associated trajectories. The information associated with a shotline includes identification of system components in the threat’s path as well as parameters associated with each intersection: intersection locations, lines-of-sight through impacted components, component normal thicknesses, obliquity angles, and distances between components. Once generated, a ballistic vulnerability program, such as COVART, can use FASTGEN-generated shotline information to estimate threat penetration, component damage, and system vulnerability. Additionally, FASTGEN can support COVART analyses involving either parallel or diverging rays.

In the past, FASTGEN was a standalone program and exported shotline descriptions to binary and text output files. However, with the development of COVART6, FASTGEN has become a shared library within COVART’s framework. In its current form, FASTGEN supplies shotline information directly to COVART on an “on-demand” basis. The user can still generate shotline output files, but they must exercise the legacy features of COVART6 to do so. While these legacy features are still available, AFLCMC/EZJA highly recommends using the newer, integrated process in COVART6, as doing so may also improve the runtimes associated with analyses and provide access to newer features.

The inputs to FASTGEN are descriptions of the system of interest and the rays to trace. The VTK includes a User’s Manual that describes how analysts can provide these inputs. In addition to user documentation, the VTK also includes reports describing the theory behind FASTGEN and the efforts to verify and validate the program.

FASTGEN is a simple model with a simple mission:  determine the ballistic threats that may hit in an attack against a particular system. This mission aids the completion of vulnerability analyses, which in turn, supports the design and fielding of effective weapon systems assisting the modern warfighter.

The package supports geometry editing with constructive solid geometry (CSG) Boolean operations, such as union, intersection, and subtraction. BRL-CAD also provides tools for performing model validation and verification (V&V), including computing mass, moments of inertia, and centroids, as well as detecting overlap interferences and other hierarchical modeling issues. For application developers, BRL-CAD also supports a rich application development application programming interface (API) through which geometry, ray tracing, and attribute data are passed to other applications. The system runs on all major desktop and supercomputer platforms, including BSD, Linux, Mac OS X, Windows, and various UNIX operating systems. In addition, BRL-CAD is an actively developed open source project with open participation from contributors around the world.

FATEPEN is a set of fast-running algorithms that simulate the penetration of and damage to spaced target structures by compact and noncompact warhead fragments and long rods at speeds up to 5 km/s. The model predicts penetrator mass loss, velocity loss, trajectory change, and tumbling throughout a target. The mass loss model includes an impact fracture model that, depending on impact conditions, transforms an incident intact warhead fragment into an expanding, multi-particle debris cloud, which FATEPEN then tracks through the remaining target structure. FATEPEN also predicts multi-particle loading and damage to plate structures.

The FATEPEN model is based, as much as possible, on fundamental principles of mechanics together with assumptions regarding the principal loading and response mechanisms involved. The latter derive directly from experimental observation. Empirical elements have been introduced either to obtain better agreement with available test data or to describe phenomena not readily amenable to first principle analytical modeling.

The penetration algorithms comprise deterministic and analytical/empirical engineering models and are contained in a separate Dynamic Link Library for easy portability to other calling programs. A Visual Basic graphical user interface is used to define and/or select penetrators, targets and encounter conditions in the stand-alone PC version of the code.

The FATEPEN algorithms have been partially validated by comparisons between model predictions and test results for a variety of projectile and target combinations.

The primary application of the code has been target vulnerability and weapon lethality assessments involving air targets and lightly armored surface targets. FATEPEN has been transitioned to use by all three Services and is used as a subordinate model in a number of simulations, including the Advanced Joint Effectiveness Model (AJEM).

This 2018 Pedigree release supersedes the prior reports released in 2011 and is intended to be a living document, updated as additional threat data becomes available. The 2018 release separates the prior two-volume set (Guns and Missiles) and includes significant updates to many non-exploding projectile threats (i.e., ball and armor-piercing incendiary rounds).  The included non-exploding projectile characterization files have been updated to the new Common Threat Format keyword comma separated value (kcsv) format compatible with COVART, the AJEM, and the Fire Prediction Model (FPM).  The individual threat reports for many threats provide more in-depth discussion of specific threat data development and verification and validation of the threat inputs.

Varies depending on the software used.

requires the following data for execution of an analysis:

A geometric representation of the system’s geometry is the key input to FASTGEN. Ray descriptions are also required. Ray descriptions include a direction (i.e., azimuth and elevation) as well as inputs relating which aim points to process.

Varies depending on the software used.

The COVART model determines the vehicle vulnerable area or probability of kill (Pk) as a function of kill level. The kill levels are user defined and can be time- or operational-capability-based, with up to 15 kill levels per analysis. The vulnerable area and Pk data can be output in tabular format for each system and the total target, as well as by shotline in a format suitable for graphical display (Pk Plot).

FASTGEN provides shotline information directly to COVART. If using the legacy mode of COVART, the outputs are binary or text shotline files containing all of the intersections between threat rays and the system’s geometry model.

FATEPEN predicts the individual particle hole diameter and enlargement of the central hole to a diameter due to a combination of multi-particle area removal and/or multi-particle impulsive loading. The individual plate damage output listings include the overall pattern diameters, enclosing both perforating and nonperforating penetrator and plate particles, respectively, and the diameters of the circles, enclosing just the perforating secondary particles of each kind. FATEPEN also predicts the total impulse delivered to the plates by perforating and nonperforating particles along with the total area of all the holes and the total mass removed from the plate.

The VTK V7.3 is UNCLASSIFIED

DISTRIBUTION STATEMENT C. Distribution authorized to U.S. Government Agencies and their contractors, CRITICAL TECHNOLOGY, 10 October 2017. Other requests for this document shall be referred to 704 TG/OL – AC/DSIAC, Wright-Patterson Air Force Base, Ohio 45433.

WARNING − This media contains technical data whose export is restricted by the Arms Export Control Act (Title 22, U.S.C., Sec 2751, et seq.) or the Export Administration Act of 1979 (Title 50, U.S.C., App. 2401 et seq), as amended. Violations of these export laws are subject to severe criminal penalties. Disseminate in accordance with provisions of DoD Directive 5230.25.

The Pedigree Documents consists of two CDs. One is classified SECRET/NF and the other is UNCLASSIFIED/FOUO and both have the same distribution statement.

DISTRIBUTION STATEMENT D. Distribution authorized to the Dept. of Defense and U.S. DoD contractors only, CRITICAL TECHNOLOGY, 20 December 2019. Other requests for this document shall be referred to ATTN: Ms. Stacey Almeter, AFLCMC/EZJA, Room 018, Bldg 11A, 1970 Monahan Way, Wright-Patterson Air Force Base, Ohio 45433.

WARNING − This media contains technical data whose export is restricted by the Arms Export Control Act (Title 22, U.S.C., Sec 2751, et seq.) or the Export Administration Act of 1979 (Title 50, U.S.C., App. 2401 et seq), as amended. Violations of these export laws are subject to severe criminal penalties. Disseminate in accordance with provisions of DoD Directive 5230.25.

​Requests from non-U.S. Agencies must be forwarded to their country’s U.S. embassy.