What is currently being done to use fluorescence/emission sensing/detection for chemical threat agents?

The phrase “chemical threat agents” is meant to include chemical warfare agents (CWAs) (blood agents, such as cyanogen chloride and hydrogen cyanide; blister agents, such as lewisite, sulfur mustard, and nitrogen mustard; nerve agents, such as tabun, sarin, and VX; and pulmonary agents, such as chlorine and phosgene) and toxic industrial chemicals (such as hydrogen sulfide, hydrochloric acid, phosphine, and formaldehyde).

The phrase “fluorescence/emission sensing/detection” is meant to encompass any means, active or passive, to create or sense electromagnetic radiation, including reflectance, from samples for the purpose of detecting chemical threat agents.

CWAs and toxic industrial chemicals (TICs) are IR active—they can be detected in IR (see Figure 1) by absorbance, transmission, and even reflectance.  This enables active and passive detection of these species in close physical proximity and from large standoff distances.  Because IR spectroscopy is a mature field, there are many commercially available devices.  The Department of Homeland Security (DHS) performed an assessment of handheld IR devices [1] that are available to first responders as part of SAVER (System Assessment and Validation for Emergency Responders).  DHS has also reviewed passive IR systems for standoff chemical detection, including single-band imagers; multispectral imagers; hyperspectral, single-pixel scanners; and hyperspectral imagers [2].  An example technology in this genre is the iMCAD (improved Mobile Chemical Agent Detector), developed and manufactured by Mesh, Inc.  The iMCAD is a passive Fourier-transform IR instrument [3] with thermal imaging and visible cameras that can detect, identify, and map chemical weapon vapors, chemical aerosols, toxic industrial chemicals, and biological particles at distances up to 6 km away.  The system is designed to operate from stationary or mobile military or civilian platforms. 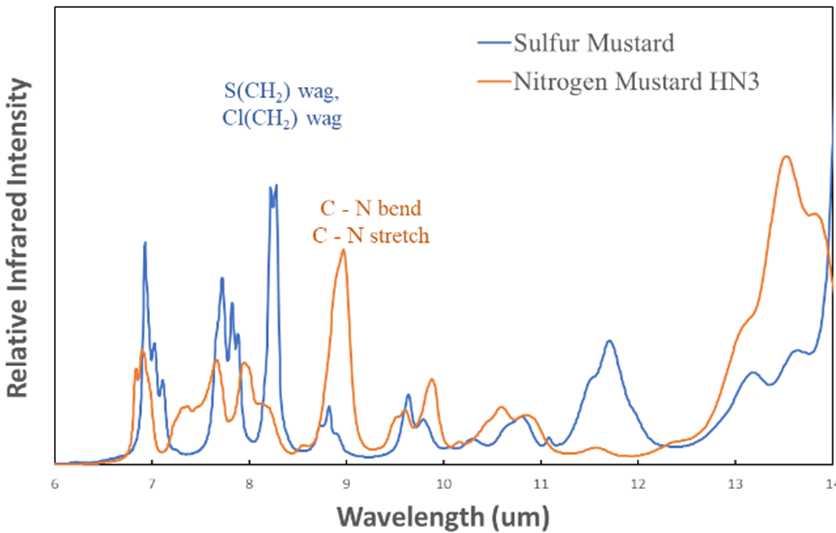 Raman spectroscopy differs from IR spectroscopy in that an ultraviolet laser is typically used to excite the target molecule to a virtual state.  This state then relaxes to the target molecule’s ground vibrational states, producing a characteristic spectrum from 0 cm-1 to 3,500 cm-1 immediately to the red of the exciting wavelength.  Like IR spectroscopy, Raman spectroscopy is a mature science, and there are commercially available devices to detect chemical threat agents.  The DHS has also reviewed commercially available, field-portable Raman sensors used to identify unknown solid and liquid materials encountered during hazardous materials operations [4].  The significant advantage of Raman for these applications is that the laser can operate directly through sealed plastic or glass containers, thus avoiding exposure to potentially dangerous substances.

One of the technologies reviewed by DHS is the Thermo Scientific FirstDefender RM, now called the RMX.  A current photo of the handheld RMX from the product brochure [5] is shown in Figure 2.  The unit weighs only 2 lb and is fully self-contained with an integrated laser and detector/spectrometer.  The library holds ~11,000 reference spectra to identify unknown chemicals, including explosives, toxic industrial chemicals, precursors, and more.

Laser Raman has been adapted for mobile and stationary detection of CWAs on surfaces, including the ground [6]. The developed system can be applied to stationary scenarios and mounted on vehicles for mobile, on-the-move applications.  In these incarnations, the laser is placed in short-range standoff (<3 m) of the contaminated surfaces.  A recent U.S. Army Small Business Innovative Research (SBIR) topic [7] sought to extend the laser range to 50–100 m by using a remotely operated unmanned aerial vehicle flying 1 to 2 m above the laser spot for detection.

The availability of QCLs (miniature, uncooled, narrow-wavelength, semiconductor lasers) in the 3.5–13 µm region has opened up numerous applications for active standoff (typically, 1–3 m) detection of explosives and CWAs individually or as a group [8, 9].  Figure 1 shows several key features for nerve and blister agents in this spectral region.  After many years of research and development, this technology has now evolved to a technology readiness level of ~6.  One of the more advanced systems has been developed by Pendar Technologies [9].  This portable system weighs roughly 20 lb, is composed of four 32-element QCL arrays covering the 6.5–10.5 µm region, and has been used for explosives, VX, and T-mustard.